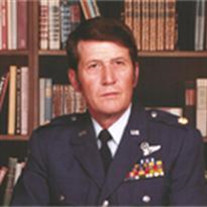 Major Gene B. Ware USAF (Ret) passed away on Wednesday, September 14, 2011 at the age of 75. He was born on October 18, 1935 in Charlotte, NC to the late Oliver and Juanita Ware. Gene is a graduate of Virginia Tech. where he also served as a member of the Corps of Cadets. He joined the Air Force and went to pilot training. As a pilot he flew B-52’s and B-47’s and also was a C. F. I. C. instructor pilot. Gene served his country in Vietnam and during peace time. He was a decorated soldier earning the Distinguished Flying Cross, the Air Medal w/7 Oak Leaf Clusters, Air Force Commendation Medal, the Air Force Longevity Service ribbon w/4 bronze devices, the Vietnam Service Medal, and the Republic of Vietnam Gallantry Cross. Gene had the honor of flying a retired B-52 to an Aeronautical Museum in Ohio for display. After his retirement he moved to Virginia and had a cattle ranch, but gave that up over 14 years ago to retire in Lake County FL. Locally he was a member of Gloria Dei Lutheran Church, a member of the NRA, an avid reader, and a straight faced poker and chess player. Gene was also a student of theology, particularly eschatology. He is survived by his loving wife of over 49 years, Myrna Ware of Leesburg, FL, their three daughters; Laurie O’Connell of Summerville, SC, Tracy Ware of N. Charleston, SC, and Hallie and Son-in-Law Walter Harvey of Summerville, SC, five grandchildren; Austin, Aaron, Rachael, and Kiley O’Connell and Emma Harvey. Gene is also survived by a former son-in-law and family friend William O’Connell. Funeral services for Maj. Ware will be held Saturday, today, at 1:00 p.m. in the Gloria Dei Lutheran Church with Rev. Thomas Church officiating. Burial, with full military honors will take place on Monday, Sept. 19, 2011 at 2:00 p.m. in the Beaufort National Cemetery in South Carolina. The family has requested that memorial contributions in Gene’s honor be directed toward the Gloria Dei Lutheran Church.  Page-Theus Funeral HomeAnd Cremation Services

Major Gene B. Ware USAF (Ret) passed away on Wednesday, September 14, 2011 at the age of 75. He was born on October 18, 1935 in Charlotte, NC to the late Oliver and Juanita Ware. Gene is a graduate of Virginia Tech. where he also served as a... View Obituary & Service Information

The family of Gene Boyce Ware created this Life Tributes page to make it easy to share your memories.

Send flowers to the Ware family.