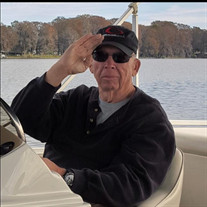 Gary, age 77, died January 14, 2019 in his home, surrounded by family, from complications of Lewy Body Dementia. He was the son of Betty Jane Childs and Robert George King. He married Patricia Suzanne Whitmore March 24, 1962 in Lansing, MI. They had three children, whom they raised primarily in Bay Port, MI. Gary was a loving and devoted husband, father, friend and mentor. He was gregarious, intelligent, and kind. He was also a gifted athlete. He was inducted into the J.W. Sexton High School Athletic Hall of Fame for Wrestling (1958-59), after winning two consecutive state championships. He attended Michigan State University on a wrestling scholarship and held the pinning record there for a number of years. He was an alternate on the 1960 US Olympic team - due to a dislocated elbow, in the final qualifying match at Madison Square Gardens. He also played football at both the high-school and college level (though his college football career was cut short due to a conflict with his wrestling scholarship). In his later years, he enjoyed hunting, fishing, sailing and boating, golf, pickleball and shuffleboard. Most of Gary’s career was in and around the agricultural field. He retired after 21 years as CEO of the Ohio AgriBusiness Association, a membership-based state trade association serving Ohio agriculture, in 2010. Gary is survived by his brother James King (Linda Anderson), wife Patricia King, daughter Keri King-Libbe (Doug Bunce), sons Brad King (Melissa Moffitt) and Troy King (Jessica Hotaling); seven grandchildren; and his beloved cat Lewis. Memorial services will be held in Lansing, MI and Leesburg, FL later this year. The family requests donations to the Lewy Body Dementia Association in Gary’s name in lieu of flowers - Click Here[https://www.lbda.org/go/understanding-lbd]

The family of Gary Robert King created this Life Tributes page to make it easy to share your memories.

Send flowers to the King family.