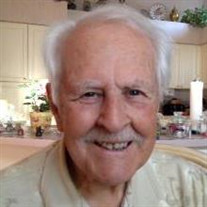 Frank M. Grace age 85 passed away Tuesday, March 24, 2015 at his residence in The Villages, Florida. Frank was born in East Providence, Rhode Island and moved to the Villages area in 1993 from Lake Wildwood, California. He was a member of St. Timothy’s Catholic Church in The Villages, and he was a Veteran of the U. S. Navy. After leaving the Navy he went to the University of Tennessee, Knoxville, where he was a member of Pi Kappa Alpha Fraternity, and graduated with a Bachelor’s degree. He spent over 30 years as Director of Communications with Southern Bell, Pacific Bell, and AT&T. He also served on the staff of former California Governor Ronald Reagan as Assistant Secretary of the State of California Health and Welfare Agency. He was an accomplished and respected writer and journalist, with his works being published in Navy, Music, and News periodicals around the country. He wrote many articles and reviews for the Daily Sun, Daily Commercial, and Style Magazine and the American Rag a well-known jazz newspaper. Most recently he was co-owner (with his wife Sue) of Grace’s Books and Records in Leesburg, Florida, where he was able to express and share his deep love of the written word, and music. Frank was truly a dynamic person to meet and was known from his work throughout the years with the many administrative and organizational boards he served as someone who got things done! He will be remembered by those closest to him for his infectious laughter, intelligence, wisdom, and his handsome smiling demeanor. He was a man of many talents but his greatest talent was people. He could speak to anyone, anywhere, about anything and always left behind a warm afterglow. He is survived by his loving wife of: 52 years – Sue; Children – Michael Robert Grace of Sacramento, CA; and Theresa Lynn Grace of Rancho Murrieta, CA; Brother – Robert J. Grace of Warwick, RI; Sister – Judith Ann Akroyd of Palm Beach, FL; Grandchildren – Brittany Michelle Grace; Adam Christopher Marshall; and Ashley Marisa Dyer. A Memorial Service Celebrating Franks life is planned for 8:30 A. M. Tuesday, April 7, 2015 at St. Timothy’s Catholic Church, The Villages. Page-Theus Funeral Home and Cremation Services has been entrusted with all arrangements.

Frank M. Grace age 85 passed away Tuesday, March 24, 2015 at his residence in The Villages, Florida. Frank was born in East Providence, Rhode Island and moved to the Villages area in 1993 from Lake Wildwood, California. He was a member of... View Obituary & Service Information

The family of Frank M. Grace created this Life Tributes page to make it easy to share your memories.

Send flowers to the Grace family.