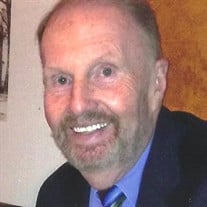 Francis Edward (Ed) Rhinehart, 73, of The Villages, Florida passed away suddenly on November 24, 2015. He was born in Cleveland Heights, Ohio son of the late Francis and Frances (nee Barrett) Rhinehart. He is survived by his beloved spouse, Madonna (Donna) Welsh; sister Bretta and spouse Tom Zamzow; In-laws Sister Ritamary (Dorothy) Welsh, OSU; Terry (Jack McTigue) Welsh, William (Jan) Welsh and Richard (Patricia) Welsh as well as many loving nieces and nephews, great nieces and nephews and cousins.Ed graduated from Cathedral Latin High School and John Carroll University in Ohio. He majored in business and worked in various sales position and interior home remodeling. He was an avid sports enthusiast participating in golf, bowling, pickleball and fast pitch softball. He also enjoyed and excelled as a CYO football and basketball coach. Upon retirement Ed followed his many avocations especially in the area of horticulture. He worked for many years at Uncle John’s Plant Farm in Olmsted Falls, Ohio and became a Master Gardener through Ohio State University. In Vermilion, Ohio Ed worked to bring floral beauty to the area and developed a “Music, Flowers and a Sunset” event that has been successful for the past 10 years. When arriving in The Villages in 2008 Ed continued his love of participation in sports and gardening. He became a Master Gardener with the UF/IFAS Sumter County program. He helped develop the Gardeners Journal, the Master Gardeners Speaker Series and was a presenter at many clubs, organizations and county sponsored programs. He was especially interested in city beautification and traveled throughout the United States with the America in Bloom program. He worked with several surrounding cities and was especially proud of the city beautification work in Coleman, Florida. Ed was a monthly columnist for The Villages Daily Sun gardening section and wrote weekly gardening columns for the local newspaper in his hometown of Vermilion, Ohio Ed enjoyed playing golf regularly in The Villages with several different groups. While in The Villages Ed learned and enjoyed playing pickleball most recently with the Collierites. He added bowling to his sports love and played regularly in a league. Ed was extremely active in the village of Duval Social club serving as their president. He was influential in increasing membership to over 300 residents with his enthusiasm and commitment. Ed was friendly, outgoing, caring, enthusiastic and committed to his family and all of his many friends. He made an impression on everyone he met and cared deeply for them. He loved working in his own gardens and helping others to enjoy gardening as much as he did. As an organ donor Ed’s corneas will be given, one each, to two visually impaired people. Arrangements are being handled by Page-Theus Funeral Home in Leesburg, Florida. You can leave condolences and memories on their website. A memorial Mass will be held on Monday, December 7 at 10:00 am at Fl with a reception following at the Rohan Regional Recreation Center 850 Kristine Way, The Villages, Florida. All are welcome. In lieu of flowers please send contributions in Ed’s memory to the Ursuline Sisters 2600 Lander Road Pepper Pike, Ohio 44124.

Francis Edward (Ed) Rhinehart, 73, of The Villages, Florida passed away suddenly on November 24, 2015. He was born in Cleveland Heights, Ohio son of the late Francis and Frances (nee Barrett) Rhinehart. He is survived by his beloved spouse,... View Obituary & Service Information

The family of Francis Edward Rhinehart created this Life Tributes page to make it easy to share your memories.

Send flowers to the Rhinehart family.