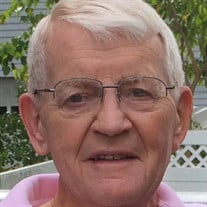 Francis P. Maher “Frank”, age 77, passed away peacefully surrounded by his loving family on May 15, 2019. Frank was born on December 3, 1941 in Balla, County Mayo, Ireland to John Allen and Anne (Durcan) Maher. In 1962, he emigrated to the United States and lived in New York City. Frank attended Fordham University and began a career in retail banking. On February 3, 1973, Frank married his devoted wife, Concetta Ettori. Together they settled into Pearl River, NY where they lovingly raised their son and daughter. In 2002, the happy couple moved out of the NYC area to enjoy their retirement years together. Frank enjoyed golfing, always striving to improve his handicap. He loved to volunteer and help others especially as a member of the Plantation’s Italian Club and of The Knights of Columbus Council #5644. Above all, Frank was a devoted family man. He cherished his roles as adoring husband, dad, and grandpa. He loved and was loved by his extended Maher family, his in-law Ettori family and his many close friends whom he considered family. Always a quintessential gentleman, Frank will be remembered for his soft smile, his kind disposition and his ability to bravely accept whatever health challenges he encountered throughout his life. Frank is survived by his wife, Concetta, his son, John Maher and wife Karen of Waldwick, NJ, his daughter Virginia Bordonaro and husband Benjamin of Parsippany, NJ, and his grandchildren Jessica, Adrianna, Gabrielle and Aidan. Also surviving are brothers and sisters Anne Dinnegan, Noreen Gavin, Jack Maher, Theresa Coyle, Patrick Maher, Dacky Maher, Christina Pringle, Dolores Kern, Grace Cock and Anthony Maher as well as many nieces and nephews. He was preceded in death by his parents, brothers Seamus Maher and Gerry Maher and sisters Kathleen Maher and Julia Gorzkiewicz. Visitation will be held on Friday, May 17 from 4:00pm-6:00pm at the Page Theus Funeral Home in Leesburg, Florida with a Funeral Mass on Saturday, May 18, 2019 8:30am at St. Paul’s Catholic Church in Leesburg, FL. Additionally, a Celebration of Life gathering will be held at a later date in the NY/ NJ area. In lieu of flowers, the family would like for donations to be made in Frank’s memory to the Cornerstone Hospice Foundation at 2445 Lane Park Road, Tavares, FL 32778.

The family of Francis P. Maher "Frank" created this Life Tributes page to make it easy to share your memories.

Send flowers to the Maher family.