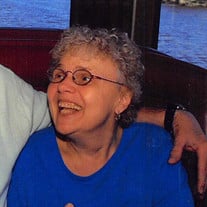 Frances Margaret Hoffman Fenush, 3-19-49---11-5-16 Fran quietly slipped back into practice with the choir of angels, Sat. 11-5-2016. Born in Buffalo NY, she was raised in Cheektowaga by her parents Mary I. and Joseph J. along with her older sister, Mary C. and younger brother James J. She attended St. Al's parochial school, Bishop Neumann High School, and Erie Community College where she graduated as a COTA. She worked in OT at the West Seneca Development Center from 9-69 until 3-70 when she became the first employee of the soon to open Western NY Children's Psychiatric Center. She remained in OT until 1980 when she graduated from Empire State College, facilitating her transfer to CPC's Social Work staff. She retired in 2003 having specialized in assessment and discharge planning, as well as interfacing with Family Court, the Juvenile Justice system, and multiple public and private treatment facilities. Fran was an avid skier, member of the National Ski Patrol and a better than average racquetball player. She also enjoyed the company of family and many friends, entertaining, cooking, and sewing, along with multiple other artistic efforts. Fran experienced her first MS exacerbation in 9-90. From 92-2006 she participated in numerous investigational studies through Buffalo General Hospitals Baird and Jacob's Institutes including the double blind which led to the approval of the second drug for the treatment of MS, Avonex. She met her husband, Thomas, also a social worker, when he transferred to CPC in 1980. The couple married 4-29-89 and moved to FL 10 years ago after Tom's retirement from NYS IN 2005. She is preceded into eternity by her parents and younger brother. She is survived by her loving husband and caregiver, Tom Fenush, her sister, Mary C./Michael Maurer, a brother in law, Michael Fenush, a sister in law, Susan Hoffman, 3 nieces and 1 nephew, Shirley/Ken Brown, Laura Hoffman/Dave Johnson, Rebecca/Joseph Murphy, Eric/Lindsay Maurer, 5 grand nieces and 2 grand nephews. Flowers graciously declined. Memorials can be directed to the National MS Society (NMSS). Arrangements entrusted to Page-Theus and interment to the Hillcrest Memorial Gardens, both of Leesburg, FL. Visitation, Wed. 11/9, 2-4 pm and 6-8 pm in the Chapel at Page-Theus. A mass of Christian burial will be celebrated on Thur. 11/10, at 8:30 am at St. Paul's Roman Catholic Church, Leesburg, FL.

Frances Margaret Hoffman Fenush, 3-19-49---11-5-16 Fran quietly slipped back into practice with the choir of angels, Sat. 11-5-2016. Born in Buffalo NY, she was raised in Cheektowaga by her parents Mary I. and Joseph J. along with her older... View Obituary & Service Information

The family of Frances Margaret Hoffman Fenush created this Life Tributes page to make it easy to share your memories.