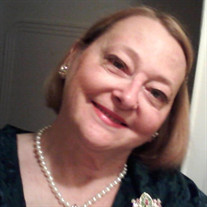 It is with profound sadness that we announce that Frances T. Bowen was called to be with the Lord on March 27, 2021. Those who knew Frances earlier in her life will remember her as an intelligent, witty, creative soul who loved teaching art to schoolchildren and adults alike, and playing on her guitar and singing with her children. She was a talented artist, winning awards at various art shows, and also enjoyed making jewelry, sewing, knitting, crocheting, and needlepoint. Frances had also performed in several plays at the Melon Patch theater in Leesburg, and even won a SARA award for her role in Arsenic and Old Lace. Her role in Plaza Suite brought down the house every night with her perfect comedic timing, drawing comparisons to the acting style of Lucile Ball. In addition, Frances and her husband Jim were also known to kick up their heels on occasion, performing Scottish Country Dancing with various groups around the state. They had performed at Epcot several times, and at various Scottish Highland Games throughout the years. Professionally, she went on to earn her MBA, all while working full time and raising her three children with her husband. She then became a skilled computer programer early in the days of information technology, and finally worked as a senior programmer for the City of Orlando. Unfortunately, Frances began to suffer from numerous health problems in midlife and eventually became debilitated by her conditions. She was ill and in constant pain and from lupus, fibromyalgia, degenerative joint disease, arthritis, neuropathy, diabetes, heart disease, kidney disease, and other disorders. Suffice to say, her spark and joy of life was muted by her suffering. Yet she carried on. She found solace, fellowship, and friendship at the Church of Latter Day Saints in Sumterville, FL. Although, due to her health, she was not able to attend church as regularly as she would have liked, the words of the Bible and Book of Mormon comforted her. She often spoke of the eventual day when she would see her many loved ones in heaven, where she hoped to "sit at the feet of the Lord." Her family is deeply saddened that her time came too soon, due to complications of uncontrolled diabetes and high blood pressure. She had just been released from the hospital and seemed to be doing better when she unexpectedly passed away that weekend. Frances was preceded in death by her father, Marine fighter pilot William J. Tebow, Sr. in the Vietnam conflict, and her mother Dena A. Tebow. Her close friends, Sandy Schafer and Barbara Kline, also passed on before her, leaving her heartbroken. She promised to see them again "on the other side of the veil." She is survived by her husband of almost 50 years, James Norman Bowen, her brother William J. Tebow, Jr., and her three children, Jerrell Dayton King (Donna), Elizabeth Cartwright, and Dena Terressa Morris (Allen). Her legacy also includes her grandchildren, Austin King, Sawyer King, Benjamin Morris, Sarah Morris, Abigail Morris, Jonathan Morris, Melanie Kalmanson and Courtney Marie Kalmanson. She also was fortunate to have a large extended family, including her brother-in-law Richard Bowen, sister-in-law Bonnie Lee Paul, recently departed sister-in-law Cheryl Shaw (Danny Fisher), and their many children, grandchildren, and great-grandchildren, as well as Linda Robinson, Beth Morris, Donna Morris, Jeannette Morris, Jody Baum, Fiona Baum, and Dallas Baum. While her family has vowed to carry on her memory and continue her legacy, until we meet again, we are also gladdened that Frances is finally free from illness, pain, and suffering, has been reunited with her dearly departed friends and family, and is resting in eternity with the Lord. May she lay down her burdens and be forever uplifted. In lieu of flowers, please make a donation for Frances to the Leesburg Center for the Arts, in remembrance of her vibrant, creative spirit and artistic talents that brightened this world earlier in life. (https://www.leesburgarts.com/give) This is the Frances that her family remembers most, and undoubtedly, is the Frances who appears in the heavens. The funeral and viewing for Frances will be held on Tuesday, April 13th at 1 PM at the chapel at Page-Theus Funeral Home in Leesburg, FL. An informal reception will then be held afterward from 2-5 PM at the Leesburg Venetian Center in the Chain of Lakes Room. Attendees are strongly encouraged to wear face masks and to social distance at these events. Inurnment will be held at a later date at Hillcrest Memorial Gardens in Leesburg, FL. To view a live stream of the services at the funeral home, please follow the link below Tuesday, April 13th at 01:00pm: http://webcast.funeralvue.com/events/viewer/51880

It is with profound sadness that we announce that Frances T. Bowen was called to be with the Lord on March 27, 2021. Those who knew Frances earlier in her life will remember her as an intelligent, witty, creative soul who loved teaching art... View Obituary & Service Information

The family of Frances T. Bowen created this Life Tributes page to make it easy to share your memories.

It is with profound sadness that we announce that Frances T....

Send flowers to the Bowen family.