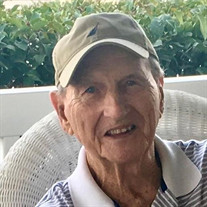 Foster Ephriam Castleman, Jr., 89, Lady Lake, Florida passed away on November 9, 2020 at Freedom Pointe at The Villages. He was born on January 1, 1931 in Nashville, Tennessee to parents Foster Ephriam Castleman, Sr. and Blanche Marie (Jackson) Castleman. His family moved to Jacksonville, Florida where he spent his early years and attended school. Following graduation from high school, Foster was signed to a minor league professional baseball contract by the New York Giants as a promising young infielder. After two seasons in the minor leagues he enlisted in the U.S. Navy during the Korean War. Upon his discharge he returned to professional baseball, reaching the major leagues in 1954 where he was a member of that year’s World Series champion Giants team that swept the heavily favored Cleveland Indians. He played all or parts of five seasons in the majors and another three years in the minors before retiring from baseball. He later worked in the men’s apparel industry with the Arrow Shirt Company and Munsingwear which took him to Atlanta, Raleigh, and finally Cincinnati where he finished his career in real estate sales for Coldwell-Banker. Foster’s early family life offered challenges, but he grew to be a man of strong faith and unashamed spirituality. He and Thelma met and married as members of the same church in Cincinnati and spent portions of the last 25 years in central Florida where they they found a warm and supportive home at First Baptist Church of Leesburg. He lived full time in Florida the last several years and is survived by his loving wife: Thelma Bearden Castleman of Lady Lake, Florida; sons: Craig Castleman of Buford, Georgia, Cary Castleman of Ohio, Joseph “Chip” Bearden of Boonton Township, New Jersey, Mark Bearden of Richmond, Virginia; a daughter: Diane Bearden Zipko of Oxford, Ohio; a brother: Lewis Castleman of Jacksonville, Florida; seven grandchildren, one great-grandchild, and multiple nieces and nephews. He was predeceased by daughter Kimberly Castleman Murrell and sister Betty Jean Castleman McKibben. A service of remembrance will be held at a future time, online condolences may be shared by visiting www.pagetheus.com.  Arrangements are entrusted to Page-Theus Funeral Home, Leesburg. “Fear not, for I am with you; be not dismayed, for I am your God. I will strengthen you, yes I will help you. I will uphold you with my righteous right hand.” ~ Isaiah 41:10 ~

The family of Foster Ephriam Castleman Jr. created this Life Tributes page to make it easy to share your memories.

Send flowers to the Castleman family.