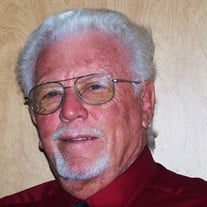 Everett “Gene” Johnson age 80, passed away Thursday, February 26, 2015 in Tavares, Florida after a courageous 7 year battle with cancer. Gene was born in Lafayette, Indiana where he went to Jefferson High School. He was a member of the Congress Street Methodist Church. He later moved to the Tavares area in 1998 from Boynton Beach, Florida. He was retired from Palm Beach County where he served as a County Plumbing, Gas and Mechanical Inspector. He was involved in the Palm Beach County/Treasure Coast Chapter of the Florida Association of PGMI on the Executive Board between 1991-1999; holding such titles as Director, President and Vice President. He also was a long standing member of the Sheet Metal Worker’s Unions, Indiana Local 20 and Florida Local 32. Gene was known for his sense of humor, fun loving personality, and for being a man who was never at a loss for words. He will be remembered by those closest to him as a loyal friend who was always ready to help someone in need. Words like fair, devoted and confident describe him best. He was handy and could fix just about anything and was always known to be tinkering in his workshop. Gene served as Past President of the Fox Run Homeowner’s Association; though he was still quite involved in decision making/voting. He had a love affair with the water, being an avid boater his entire life. He was a member of the Fox Run Boat Club in Tavares for many years and past Commodore. He began racing hydro boats from 1965 until 1980. He loved the ocean and fishing for sailfish, grouper and other sport fish. Gene enjoyed helping the Lake County Sheriff’s Department, as a volunteer for the Citizens Marine Patrol. He lived his life in a powerful way. Coming from Indiana, he loved the open wheel Indy cars and Nascar, Go Tony! He ran at a pace at least 30 years younger than his actual age and boldly defied his original cancer prognosis for nearly 7 years. He was truly an inspiration to those who encountered him. He is survived by his loving wife of 17 years Pat; 1 natural child – Jeffrey (Debbie) Johnson of Apache, AZ; and 3 step children – Lisa Potts of Boynton Beach, FL; Tricia MacCarthy of Jupiter, FL; and Darryl Honer of Vero, FL; a sister – Pat (Clyde) Feaster of Lafayette, IN; 11 Grandchildren and 5 Great-Grandchildren. A celebration of Gene’s life is planned for 1:00 P. M. – Sunday, March 8, 2015 at the Page-Theus Funeral Home Chapel – 914 West Main St., Leesburg, Florida. The family will receive friends an hour prior to the service (12:00P.M. - 1:00 P.M.). The family suggests that in lieu of flowers memorial contributions be made to Toys for Tots or the charity of choice in Gene's Memory.

Everett &#8220;Gene&#8221; Johnson age 80, passed away Thursday, February 26, 2015 in Tavares, Florida after a courageous 7 year battle with cancer. Gene was born in Lafayette, Indiana where he went to Jefferson High School. He was a member... View Obituary & Service Information

The family of Everett "Gene" Johnson created this Life Tributes page to make it easy to share your memories.

Send flowers to the Johnson family.