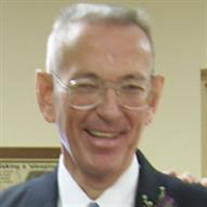 Draiss, Sr., Edward F.-Leesburg, Fl. – Edward F. Draiss, Sr. “Ed” passed away peacefully on Friday, March 6, 2020, with his Caretaker, Susan, by his side. His loving children were on route to pay their final respects. He was the son of the late Leo and Mae Draiss. Ed was born in Troy, NY and grew up in North Greenbush, where he graduated from Columbia High School at the age of 16. Ed continued his education throughout his lifetime. He worked at A.G. Greenhouse, In. for 25 years, working his way up to V.P. of Sales. Ed had always wanted to own his own business so he and his wife Ann both bought and ran the Corner Ice Cream Store in Guilderland. The Store was a landmark located on the corners of Route 20 and Route 146. After several years, Ed and Ann moved The Corner Ice Cream Store to The Carman Plaza in Guilderland, where it remains today. In 1998, the business was sold and then Ed moved to Florida. He enjoyed playing golf, bridge tournaments, and following the Stock Market. He also spent his life raising his children to embrace the importance of an education and a strong work ethic, of which they are all grateful. Ed is survived by his children, Edward F. Draiss, Jr., Patricia Bonitatibus (David), Robert Draiss (Jane), Kathleen Blanchette, and Scott Draiss (Amy), his 7 grandchildren and 4 great-grandchildren. He is also survived by his brother Robert Draiss (Sue), sisters Carol Cross (David Barr) and Barbara Draiss, and several nieces and nephews. He was predeceased by his brother John Draiss (Doreen), and his wife, Virginia Stofko-Draiss. Ed chose not to have services but to leave this world on his own terms. His loving children respect and support his decision.

The family of Edward Francis Draiss Sr. created this Life Tributes page to make it easy to share your memories.

Send flowers to the Draiss family.