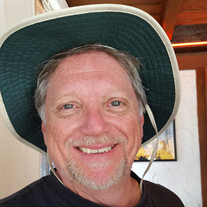 Douglas Geivett, a father, grandfather, son, brother, friend, artist, goldsmith, mentor to a core group of Colorado’s current finest goldsmiths—a thoughtful, funny, caring human being—passed away on August 2nd, 2021, from COVID-19(84), in Leesburg, Florida. His father, Littleton artist Gary Geivett, preceded him in death. He leaves behind a loving family and countless friends, including his adoring daughters Kylie Hawkins & Macey Sigaty, Macey’s husband Dustin Sigaty, son-in-law Zach Hawkins, grandchild Araelynn Hawkins, former wife Kathi Geivett, mother Barb Geivett, brother and sister-in-law Chris & Amy Geivett, and nephews Doug & Sean Geivett. Doug’s early years exemplified the active outdoor Colorado lifestyle. He used his athleticism as a gymnast to become an expert snow skier, skiing double-diamonds at the most extreme ski areas from Colorado to Utah and even tackling mountains accessed only by helicopter ski trips. Also an avid water skier, he shared many years’ worth of sunbaked summer afternoons with his closest friends aboard (and behind) their highly recognizable navy-blue-and-white, chrome, star-studded MasterCraft ski boat. Together they traversed northern Colorado’s lakes and shores beyond, especially the curved lime-stone canyons of Lake Powell, Utah. He enjoyed numerous vacations scuba diving with friends in California, Hawaii, and Cozumel, Mexico. An irrepressible creator, Doug was accomplished in a variety of artistic media. He was a skilled photographer, illustrator, painter, custom furniture craftsman, and (of course) an exceptional designer of jewelry and goldsmith. He graduated with a BFA from Colorado State University, honing his natural aptitudes both on-campus and in Europe as part of a memorable study-abroad program. After college, he quickly made a name for himself in Denver for his unique, geometric jewelry designs that combined gold, platinum, diamonds, and a variety of colored stones. He became established as the go-to source for people seeking something truly special: not mass-produced jewelry but unique, custom designs made special with direct input from the individual who would be wearing it. Doug created what others could only imagine. As a leading goldsmith in Colorado and the nation in the 1980s & ‘90s, he was honored as the youngest (and Colorado’s first) National DeBeers Diamonds Today Award winner; later, again, he was Colorado’s first Platinum Guild Award winner. Doug was chosen by American author, motivational speaker, & seminar leader Tony Robbins to design and make his wedding ring. The author of Unlimited Power, Robbins’ choice of ring is testament to Doug’s Unlimited Creativity. For many years friends & colleagues stopped in and visited him while he was the lead designer & goldsmith behind the display cases where he worked at Jay Feder Jewelers on Denver’s 16th Street Mall. The storefront and shop were always a beehive of activity, and the holidays his busiest time. He made thousands of jewelry molds that became art pieces loved & enjoyed to this day. He ended each season with a tradition of his own design, one that lasted more than 30 years, even after he left Colorado: a gathering of friends to mark the end of work on Christmas Eve, to toast to their collective good fortune and to the beginning of family celebration. Even in this modern era, with life seeming to become busier every year, Doug would always make time to talk. He loved conversing on the phone, especially while working on a piece of jewelry or into the early hours under a starlit sky. Those conversations are already missed by family & friends. Too many talented, brilliant, gifted people leave this world too early, genius musicians and artists among them, and Doug is in that group. Mozart only lived to be 35. At least we were blessed by Doug for 64 years and thankful he enjoyed a full decade in in Florida where his creativity could not be repressed, often emerging in unexpected areas like landscaping, improvised furniture, and the decoration of surfaces from the most important to the most humble. In honor of his father, Gary Geivett, Doug would donate blood on a regular basis, and was always happy to help a neighbor or friend and there was nothing he could not engineer a solution to, though his methods may leave one puzzled. One friend noted that people “wear” Doug every day. He’s still with us. How nice to be remembered and silently praised for countless unique wedding rings, necklaces, sets of earrings, and other unique creations. His art is worn with pride, and will be prized for generations. In honor of his love of art and the ocean, monetary contributions can be made to the Guy Harvey Ocean Foundation: https://ghof.org Sanguine donations are also encouraged, whether to OneBlood or to whichever organization may be convenient. Communication may be sent to: Macey Sigaty 3571 W 94th Ave Westminster, CO 80031 A celebration of life will be held on: September 18th, 2021 2:00pm 6820 N County Rd 13, Loveland, CO 80538 Please wear a Hawaiian shirt, the most “Doug” thing you can, or whatever you would like.

The family of Douglas Paul Geivett created this Life Tributes page to make it easy to share your memories.

Send flowers to the Geivett family.