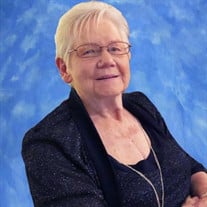 “Precious in the sight of the Lord is the death of his faithful servants.” (Psalm 116:15). As we remember the life of Dorothy Hicks Ryan, the words “precious in the sight of the Lord” and “faithful servant” have never rung more true. Dorothy was born on December 21, 1938 and was one of seven siblings. Even as a young girl, she loved the Lord and went to church faithfully… bringing her siblings to church with her as well. Little did she know then the tremendous impact her life would have as many of her siblings and even her mother later came to the Lord as a result of her faithfulness in those early days. Dorothy married Lynn Ryan on November 27, 1964 and they were blessed with a beautiful daughter, Belinda. Dorothy’s faithfulness to the Lord and to church continued on as she attended the Church of God of Prophecy in Leesburg. Over the years she served in many capacities such as VLB leader, worship leader, church treasurer, and pastor booster. She also sang as part of the Leesburg Trio with her sister, Flossie Stevens and pastor’s wife, Wilma Whitten… even singing at the church State Convention. Not only did Dorothy minister at church, but she lived out the scripture to love not only with words or speech but with actions and truth (1 John 3:18) daily at work and at home. Many of her customers and co-workers became life-long friends and anyone invited to her home would be made to feel like family. It would not be long after meeting her that she would say “Call me Big Mama” and you would immediately feel special and loved. This gift Dorothy had of making people feel loved is probably one of her greatest legacies, as she has impacted so many lives over the years. As those of us here mourn her loss, loved ones that have gone on before her rejoice at their reunion. Dorothy is preceded in death by her loving husband of 27 years Lynn, and her brothers Adolf and Johnny Hicks. She is survived by her brothers, Kenny and Daryl Hicks, sisters Wanda Hicks and Flossie Stevens, daughter Belinda and son-in-law Steven Wilhelmson, grandson Dallas Summerlin and his wife Alyssa, great-grandchildren Bristol and Beau, as well as many nieces, nephews and their families. In lieu of flowers, Dorothy’s family has requested that a donation be made to the Leesburg Church of God of Prophecy in her honor. For anyone who was unable to attend in person, they may watch a recording the services by following the link below. http://webcast.funeralvue.com/events/viewer/55489/hash:45E9B481B9004442

The family of Dorothy Lee Ryan created this Life Tributes page to make it easy to share your memories.

“Precious in the sight of the Lord is the death of his faithful...

Send flowers to the Ryan family.