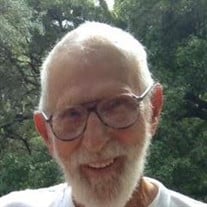 Donald Joseph Pelletier April 8, 1930 - October 17,2016 Donald J. Pelletier of Clermont Florida, passed away peacefully on October 17, 2016 with family and friends in attendance. He was born in Madawaska, Maine, to Joseph J. and Aurore (Cyr) Pelletier, and as a teenager, moved with his parents and 2 sisters to Hartford Connecticut. Don graduated from Hartford Public High School in 1946, and was awarded the top prize in Mathematics, of which he was very proud. He was employed by the Aetna Insurance Company shortly afterwards, where he met Mary Vetro of Enfield, CT and later married in 1952. He was a veteran of the United States Army, and an expert marksman, serving in Germany during 1952-53. One of the biggest joys of Don’s creative life was buying a small summer cottage on Lake Wangumbaug, in Coventry Connecticut. Don worked tirelessly throughout the years to winterize, landscape, and create a unique living space for his family, which grew to include 5 children. During this time, he was variously employed as an insurance salesman, hardware clerk, precision machinist at Pratt and Whitney Aircraft Corporation, and finally as a self-employed carpenter, detail woodworker, and handyman. Don taught himself to make, fix or build just about anything, and enjoyed socializing with neighbors in a tight-knit lake community of do-it-yourselfers, kids, and pets. Don was a man who took the road less traveled in many aspects of his life. He was unconventional and adventurous, an avid reader and lover of art. In 1967 he drove four of his five children to the National Roller Skating Championships in Lincoln, Nebraska in the family hearse, otherwise known as the Cadillac Station Wagon. In mid life, he sailed a 23-foot day sailboat from Machias, Maine to Marathon Key, Florida, and later to Fort Meyers and Labelle, living continuously on his boat for more than 15 years. He made many friends along the way, and would often sign a note with the nickname Prodigal Sailor. Don Pelletier was a collector of tools, unique objects, and curiosities of all sorts, which he often gave generously to others as gifts. He was extremely proud of his 5 grown children. When he could no longer live on his boat, he relocated to Clermont, Florida, very close to his adopted family the Elliotts, and within driving distance to his two sisters. His friends in Clermont included Pastor Bird Sanders and members of the Ferndale Baptist church, which he attended regularly. Don enjoyed a quiet life reading, tinkering and making constant improvements on his trailer where he lived alone until his death. He will be interred in the Pelletier family plot at Hillcrest Memorial Gardens, Leesburg FL. Don is survived by his sister, Rose Marie Fowler of Lady Lake Florida; his five children, Donald M. Pelletier and his wife Ginger Bowes of Barkhamsted CT, Denise Pelletier and her husband Frank Morosky of East Greenwich RI, Susan Jamaitus and her husband Jeff Jamaitus of Coventry CT, John Pelletier of Hampton, NH, and David Pelletier of Rye NH. He also leaves, four grandchildren Aleksandr Morosky of Washington DC, Adam Morosky of Providence RI, Stacy Jamaitus of White Plains NY, and Laurie Jamaitus of Astoria NY, and his very dear friends Fred and Beth Elliott and their four children of Clermont FL. Don is predeceased by his former wife Mary Pelletier, and his sister Joan Bartram. A small memorial service will be held in Clermont at a time still to be determined. Friends may offer online condolences at www.pagetheusfuneralhome.com To send flowers or a memorial gift to the family of Donald Joseph Pelletier please visit our Sympathy Store. Page-Theus Funeral Home and Cremation Services, 914 West Main Street, Leesburg, Florida 34748

The family of Donald Joseph Pelletier created this Life Tributes page to make it easy to share your memories.

Send flowers to the Pelletier family.