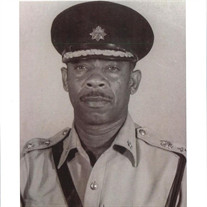 Husband, Father, Brother, Grandfather, Great-Grandfather, Uncle, Cousin, & Friend Donald Rudolph Marshall, Sr. MBE, 86, Lords Bank, Belize, Central America went to be with the Lord on August 27th 2021 while at home, and truly at peace with family and our Almighty Creator. Donald was born on September 12, 1934 in the Orange Walk District, Belize Central America to his parents Dudley Marshall and Ena Daphne Meggs. He was schooled at St. Peter’s Anglican School in Orange Walk. He was a Member of the Belize Police Force for over 20 years, serving in all districts of the country. He studied at the Bishopgarth Police Training School, in England. He was the Sergeant in charge at the Police Training School in Belize, later the Price Barracks, training young constables. Donald retired with the prestigious rank of Assistant Commissioner of Police. For his services to the Belize community, he was awarded Membership of the British Empire (MBE). He was a member of the Christ the Good Shepherd Anglican Church in Lords Bank Village, Belize District, Belize, also serving in the position of Treasurer. Before that, he was a Lay Minister at Hemenway United Methodist Church in Illinois. Donald loved carpentry and would spend countless hours laboring over projects to ensure that it was finished to flawless perfection. He was endlessly curious, making his own beers and wines, and even built an incubator to hatch chickens, using only an oil lamp and a thermometer. He made his own concrete blocks to build his home in Belmopan. Donald was a family-oriented man who cherished his relationships with his friends as much as he did with his family. Donald had a kind and generous heart and was loved by all for his compassion, thoughtfulness and unselfishness. He was instrumental in creating memories and symbolic carpentry artifacts that will never be forgotten. Donald was predeceased by his father Dudley, his mother Ena, his step-father John, his brothers Gladstone and Carl, his sisters Angella and Gwendolyn. He is survived by his loving wife of 65 years: Sylvia Mae Marshall nee Jenkins of Belize City, Belize. Donald had four sons and two daughters, 13 grandchildren and 3 great-grandchildren, who he leaves behind to treasure those memories: Sons: Dudley Marshall (Mirna) Donald Marshall (Michelle) Alexander Marshall (Maria) Michael Marshall (Veronica) Daughters: Carla Alverez (Bernardino) Sylvia Bradshaw (John) Grandsons: Malik Marshall Hasan Nikko Swain Drew Alverez Liam Marshall William Marshall Granddaughters: Nicole Marshall Stephanie Marshall Aziza Marshall Nakima Marshall Lisa Alverez Sandra Alverez Samantha Noonan Gabrielle Bradshaw Great-Grandchildren: Archer Noonan Sharolyn Noonan Leona Noonan He is also survived by his 3 sisters Marjorie, Ismay and Grethel and 6 brothers Kent, Robert, George, John, Winfield, and Paul, and a host of nieces, nephews, cousins, and friends, and by his daughters-in-law and his sons-in-law. Donald (Dan) will be greatly missed in our family and by his friends. “If his hands found labor, he did it”. The Lord took him home from his labor of work and now he can rest in the arms of the Lord. If you would like to watch a recording of the services, please follow the link below: http://webcast.funeralvue.com/events/viewer/59519/hash:3B63BC94D0D07135

The family of Donald Rudolph Marshall Sr. MBE created this Life Tributes page to make it easy to share your memories.

Send flowers to the Marshall family.