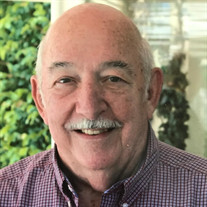 Donald I. Jackson, 83, Leesburg, Florida went to be with the Lord on February 22, 2019 at Tavares Hospice House under the loving care of his family and staff of Cornerstone Hospice. Don was born on February 23, 1935 in Eastabuchie, Mississippi to his parents Andrew Jackson and Olga (McDonald) Jackson. He was retired from the Aerospace Industry and had worked for Lockheed-Martin as a Technical Advisor for twelve years. He was a former Bomber Pilot serving in the U.S. Air Force and had served in Vietnam and had flown the B-47, B-52 and the B-58 as well as the F-4 fighter. He retired as a Lieutenant Colonel with over 27 years of Meritorious Service to the Air Force. He was very active in serving the Lord in the Mission Fields to help others and share the Gospel of the Lord. He was a member of the Military Officers Association and a member of Northland Church Lake County, Eustis, Florida. He is survived by his loving wife Judi Jackson of Leesburg, FL; three sons: Rusty (Nikki) Jackson of Goldsboro, NC, Chucky Jackson of Greensboro, NC and Richard Lee of Tampa, FL; three daughters: Leann (Monty) Kemp of Chesapeake, VA, Sharon (Kenny) Licata of Tampa, FL, Robbie (Dave) Sutherland of Longwood, FL and Melanie (Nick) Hampu of Tampa, FL; a brother: Andy (Crystal) Jackson of Lewiston, ID; a sister: Carolyn (Frank) Clayton of Orlando, FL; 11 grandchildren: Cody Jackson, Adam Jackson, Erin Kemp, Sarah Slemons, Hannah Slemons, Joshua Slemons, Chelsea Gonzalez, Robby Gonzalez, Heather Kunke and Monica Lee; four great-grandchildren: Ava Carbonell, Grant Kunke, Mila Kunke and Joshua Noah Slemons and several loving nieces and nephews. He was preceded in death by his parents and his late wife Sylvia Jackson. A Celebration of Life Memorial Service will be held on Saturday, March 16, 2019 at 11:00AM at Northland Church Lake County, Eustis, FL. In lieu of flowers the family has requested donation be made to Northland Church Lake County at 2828 S Bay St, Eustis, FL 32726. Online condolences may be shared by visiting www.pagetheus.com.  Arrangements are entrusted to Page-Theus Funeral Home and Cremation Services, Leesburg.

Donald I. Jackson, 83, Leesburg, Florida went to be with the Lord on February 22, 2019 at Tavares Hospice House under the loving care of his family and staff of Cornerstone Hospice. Don was born on February 23, 1935 in Eastabuchie, Mississippi... View Obituary & Service Information

The family of Donald I. Jackson created this Life Tributes page to make it easy to share your memories.

Send flowers to the Jackson family.