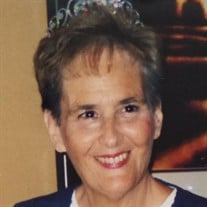 With great sadness, the family of Diana Kolb Sparks announces her unexpected passing on September 3, 2017, at the age of 70, from complications following open heart surgery. She was surrounded by her loving family and devoted friends. She is pre-deceased by her husband and best friend, Albert Farrington Sparks, her parents August and Maria Kolb and her brother, Frank Kolb and by aunts, uncles and cousins. Diana is survived by her four sisters, Maria Martins of Kissimmee; H. Sandy Kolb of Leesburg; Dorothea Ferri and her husband, Kevin McCoskey of Mamaroneck, NY; Vicki Brooks and her husband, Scott of Stratford, CT; and her sister-in-law, Jeanne Kolb of Harrison, NY. She also was the loving aunt of Debbie Porter and her husband, Vince; Christopher Kolb; Matthew Kolb; Cynthia Leckart; Robert Ferri and his wife, Lisa; Courtney Brooks and her wife, Marie Carney; Katie Kolb; and Steven Brooks and his wife, Lauren. In addition, she was the devoted great-aunt of Molly Porter, Jacob Leckart, and Caroline and Lilly Brooks. Diana was born in Flushing, N.Y. to August and Maria Kolb (Vigliotti) on November 18, 1946. After relocating to White Plains, N.Y. with her family. Diana attended White Plains Public Schools where she received the Pearl Ravikoff Memorial Award for outstanding service to her school in the quiet, modest manner that was her hallmark. This was Diana's first foray into community service, which she would carry throughout her whole life. Upon finishing high school, Diana attended the local community college before starting her 30-year career at IBM Corporation mostly in upper management. She was a member of St. Matthew's Lutheran Church in White Plains, where she served in many capacities, including the Church Council, Sunday School Superintendent, and Revised Hymnal Committee, to name a few. In 1997, Diana moved to Leesburg, Florida, where she lived with her sister, Sandy for twenty years. She was an active member of both Gloria Dei Lutheran Church and her community. Diana was extremely generous of her time and financial blessings, taking part in many charitable church undertakings, including Children's Backpack Committees, Bicycles for Students, Food Pantry, Angel Tree, Church Council, Altar Guild and many, many more. She always was there to lend a helping hand. In her community, she collected clothing and houseware donations for the Women's Abuse Center and The Sheriff's Ranch. She also was a very generous contributor to St. Jude's Children's Research Hospital, Wounded Warriors and to her church – all of which were close to her heart. A celebration of Diana's life will be held at Gloria Dei Lutheran Church, at 130 S. Lone Oak Dr., Leesburg, Fla., with the Reverend Marilyn S. Crosby on FRIDAY, SEPTEMBER 15 at 11:00 a.m. Memorial Donations in memory of Diana may be made to Gloria Dei Lutheran Church (address above) or St. Jude's Research Hospital, online or at 262 Danny Thomas Place, Memphis, TN 38105. Diana was much loved and respected and will be greatly missed by all.

With great sadness, the family of Diana Kolb Sparks announces her unexpected passing on September 3, 2017, at the age of 70, from complications following open heart surgery. She was surrounded by her loving family and devoted friends. She... View Obituary & Service Information

The family of Diana M Sparks created this Life Tributes page to make it easy to share your memories.

With great sadness, the family of Diana Kolb Sparks announces...

Send flowers to the Sparks family.