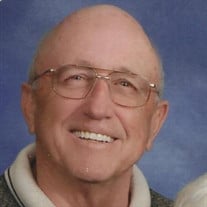 On June 27, 2021, at the age of 82, David Lloyd Mince left this world behind, headed for a new adventure in heaven. He was the beloved son of Chester and LaVera Mince, born in Flint, MI on September 2, 1938. David is survived by his wife Barbara of 49 years, his children Candi Lee Buzza (David) of St. Petersburg, FL, and Scott William Mince (Kerri) of Caledonia, MI. He was also blessed with grandchildren Danielle Burnett, Barry Ryan Wascher, Jenna Poulos, Kailyn, Anna, and Emmi Mince, and great-grandchildren Austin and Amelia Burnett, Barry Ryland, Brendon and Aubrey Wascher, Gavin and Levi Poulos. He is also survived by his brother Alan Mince of Fenton, MI. David was preceded in death by his parents, Chester and LaVera Mince, and his son Glen Alan Mince. David served the U.S. in the Army, serving most of his tour in Korea. He retired from Al Serra Chevrolet in Grand Blanc, MI after 16 years selling cars and loving every minute of it. He was a member of the choir of the First United Methodist Church in Tavares, FL for many years. David loved to snowmobile, having retired in Upper Michigan, but his favorite pastime was golfing, having accomplished two holes-in-one. He was a wonderful man, proud father and grandfather, and he always had a mischievous twinkle in his eyes. He will be sadly missed. A celebration of life will be held in his honor on August 8th from 12 to 3 p.m. at our granddaughter Jenna Poulos’ home in Grand Blanc, Michigan. A private graveside memorial service at Florida National Cemetery in Bushnell, FL will be held on David’s birthday, September 2nd. In lieu of flowers, memorials may be given in his memory to Make A Wish Foundation, St. Jude, VITAS Healthcare, 127 N. Bay Street, Suite 200, Eustis, FL, or any organization of your choice. Online condolences may be made at www.pagetheusfuneralhome.com. Arrangements entrusted to Page-Theus Funeral Home & Cremation Services, Leesburg, FL.

On June 27, 2021, at the age of 82, David Lloyd Mince left this world behind, headed for a new adventure in heaven. He was the beloved son of Chester and LaVera Mince, born in Flint, MI on September 2, 1938. David is survived by his wife Barbara... View Obituary & Service Information

The family of David L. Mince created this Life Tributes page to make it easy to share your memories.

Send flowers to the Mince family.