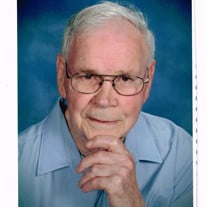 Clarence Albert Skeldon, age 88, passed away on August 31, 2018 at HarborChase Assisted Living in Wildwood, Florida. A graveside service will be held at Maple Grove Cemetery in Richville, NY on Sunday, September 23 at 1:30 pm. After the service, there will be a celebration of Clarence’s life at Mullin’s Family Restaurant, 1180 A US Hwy 11, Gouverneur, NY. Clarence was born on August 23, 1930 in Edwards, NY to the late Albert and Maude (Sparling] Skeldon. He graduated from Edwards High School in 1948. He attended Coyne Electrical School in Chicago, IL and worked as an electrician throughout much of his career. Skilled at repairing things and helping others defined him to many friends, family and neighbors. From 1951-1953, he served in the occupational forces in Germany. He worked at International Talc Company for 24 years and then at CIVES Steel, Gouverneur, NY where he retired in 1992. On August 7, 1954, he married Audrey Jones in Canastota, NY, and they raised a daughter Carol and son David in Richville, NY. A son Thomas died in 1960. They lived in Richville until 2009 when they retired to Leesburg, FL. Prior to moving to FL, Clarence and Audrey spent a decade as “snowbirds” with summers spent in New York State and winters in Mesa, AZ where they found joy in square dancing. His survivors include his wife Audrey (Leesburg, FL), daughter Carol (Marina del Rey, CA), son David and daughter-in-law Heather (St. Marys, GA), grandson Evan and his wife Brooke (Jacksonville, FL), and great-grandson Parker (Jacksonville, FL). His sisters Beatrice McEathron (Oswegatchie, NY) and Eleanor Boulier (Leesburg, FL) and brother Allen (Leesburg, FL) survive him. Many nieces and nephews also survive him. A middle twin child in a large family of siblings, Clarence is predeceased by brothers Lennis, James, Harvey, Edmond and Doug, and sisters Grace Fuller, twin Caroline Webb and Celinda Vrooman. His son Thomas and his grandson Benjamin also predecease him. Donations in memory of Clarence may be sent to the Morrison Methodist Church, 1005 W. Main St., Leesburg, FL 34748 or the Richville United Church, Main Street, Richville, NY 13681.

Clarence Albert Skeldon, age 88, passed away on August 31, 2018 at HarborChase Assisted Living in Wildwood, Florida. A graveside service will be held at Maple Grove Cemetery in Richville, NY on Sunday, September 23 at 1:30 pm. After the service,... View Obituary & Service Information

The family of Clarence A. Skeldon created this Life Tributes page to make it easy to share your memories.

Send flowers to the Skeldon family.