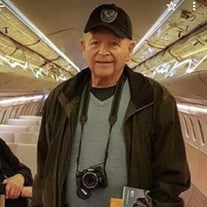 Christopher John “Chris” Morris, 82, passed away to Heaven Tuesday, February 15th, 2022 in Clermont, FL. Christopher was born September 27, 1939 in Widnes, Lancashire, England to his parents, Leonard and Harriet Joan. He was the oldest of four boys. As a boy he spent his summers and school holidays in Africa where his father was a builder for the British government. As young as 11, Chris traveled on planes before they were pressurized back and forth from England where he went to boarding school and Africa. His love of planes began as a small child seeing spitfires (His favorite plane of all time is the Spitfire) and other planes fly over his home in England during WWII. He attended Merchant Taylors Grammar school (also a boarding school) and went on to graduate from Loughborough University in Loughborough, England with a degree in Engineering, enabling him to get an apprenticeship at Saunders Row, where he worked on the first ever Hovercraft. Chris was a Stress Engineer. He also worked on several planes while at Saunders Row. Following that, he worked as a stress engineer at de Havilland/Hawker Siddeley and one of the planes he did the stress analysis on was the Hawker Siddeley Trident. He met his future wife and love of his life Ann on March 4th, 1961. They were married on March 16, 1963 and moved to the Isle of Wight, England. After several years they moved closer to the city in Billericay and had their daughter in April of 1968. Two years later in 1970, Chris decided with his wife Ann to move to America for a better life and he accepted a job with Grumman in New York, USA. It was at Grumman that he achieved 2 of his proudest projects. He did the stress analysis on the F-14 (top gun), and he also did the stress analysis for the Concorde. (All with a slide rule back then.) Industries changed and in 1974 He moved his family to the outer suburbs of Detroit to work for Ford Motor Company where He worked on such notable projects as the turbo charged engine and the electric car. He retired after 30+ years there and worked at 2 other companies briefly before retiring for good in 2001 and moving to Florida with his wife. Chris has had many friends here in his community, He was a member of the cycling club for years and for a while, the local bicycle repair man in the community. He was also in the remote-control plane club for many years and enjoyed flying and working on RC planes and drones. He was also an avid gun enthusiast, target shooting regularly for a while. Chris enjoyed traveling with his wife and they especially enjoyed visiting many of the national parks throughout their lives together and they also took trips all over Europe. He had a great sense of humor and a very kind heart, especially in his later years. Chris always enjoyed a good drink before dinner. He absolutely LOVED to read and did so all the time his entire life. Chris loved animals as well, especially cats. He also obtained 2 patents for 2 separate inventions while working at Ford Motor Company in Dearborn, MI. Chris excelled at math and loved it and He enjoyed some country music, especially Patsy Cline. He has probably seen every WWII movie ever made. Chris and his wife were HUGE fans of the show Jeopardy and Chris didn’t think he’s ever missed an episode as they recorded all of them. He and Ann had the opportunity to attend a recording of Jeopardy with Alex Trebek during a trip to California and loved it. Chris LOVED collecting and wearing ALL KINDS OF WATCHES. He also enjoyed his English tea. But most definitely, his biggest love of all next to his family was airplanes, flying, and anything to do with aviation. Chris was very kind and cared about others and often helped people whenever he could. Christopher is predeceased by his beloved wife of 52 years Ann Morris, his parents, Leonard and Harriet (Joan), his younger brother, Graeme Morris, as well as his favorite uncle, Bert. All of which, Christopher has joined in heaven. He is survived by his daughter and only child, Maria Helena Morris (FL), 2 brothers, Charles Morris (Widnes, U.K.), and Michael Morris Liverpool, (U.K.) and beloved 3 cats. A Celebration of Christopher’s Life will be held on Saturday, April 23, 2022 at 2:00PM at Page-Theus Funeral Home Chapel, Leesburg, FL. Online condolences may be made at www.pagetheusfuneral.com. Arrangements entrusted to Page-Theus Funeral Home & Cremation Services, Leesburg, FL. For anyone unable to attend the services, a live stream will be available for the chapel service by following the link below: http://webcast.funeralvue.com/events/viewer/72244/hash:D04E74B57E9DF867

Christopher John &#8220;Chris&#8221; Morris, 82, passed away to Heaven Tuesday, February 15th, 2022 in Clermont, FL. Christopher was born September 27, 1939 in Widnes, Lancashire, England to his parents, Leonard and Harriet Joan. He was the... View Obituary & Service Information

The family of Christopher John Morris created this Life Tributes page to make it easy to share your memories.

Send flowers to the Morris family.