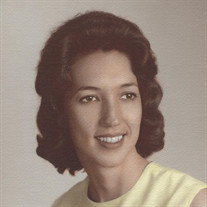 Christine Austin, 84, Tavares, Florida formerly of Leesburg, went to be with the Lord on January 10, 2019 at Osprey Lodge in Tavares, Florida. Christine was born on May 29, 1934 in Pacolet, South Carolina to her parents John Thomas Parker and Vernia Mae (Wall) Parker. She was a devoted wife and mother who had supported her husband throughout his military career. She and her late husband George moved to Leesburg 19 years ago from Hawaii after her husband retired from the U.S. Air Force. She was a member of the First Baptist Church of Leesburg where she and her husband were quite active as volunteers at the Benevolent Center helping those in need. She loved to play bridge and was an artist working in oil paint. During her husband’s military career she volunteered welcoming home U.S. Military personnel returning home from Vietnam and reassuring them that they would be alright. She will be remembered by her children and grandchildren as a “Great Mom”. She is survived by her loving children: Donna (John) Cleveland of Scottsboro, AL-+ and Dan (Mariana) Austin of Leesburg, FL; her mother: Vernia Mae Pearson of Cowpen, SC; a sister: Mary Wood of Cowpen, SC; two grandchildren: Matthew Cleveland and Zack Austin and a niece and two nephews. She was preceded in death by her father, a brother, John Parker, her beloved husband, Col. George Allen Austin and her son, David Austin. Visitation will be held on Tuesday, January 15, 2019 from 5:00PM to 7:00PM at Page-Theus Funeral Home, Leesburg, FL. A Graveside Funeral Service will be held on Wednesday, January 16, 2019 at 2:00PM at Florida National Cemetery, Bushnell where she will be buried next to her late husband. In lieu of flowers donations may be made to the Alzheimer’s Foundation in Christine’s loving memory. Online condolences may be shared by visiting www.pagetheus.com.  Arrangements are entrusted to Page-Theus Funeral Home and Cremation Services, Leesburg.

Christine Austin, 84, Tavares, Florida formerly of Leesburg, went to be with the Lord on January 10, 2019 at Osprey Lodge in Tavares, Florida. Christine was born on May 29, 1934 in Pacolet, South Carolina to her parents John Thomas Parker and... View Obituary & Service Information

The family of Christine Austin created this Life Tributes page to make it easy to share your memories.

Send flowers to the Austin family.