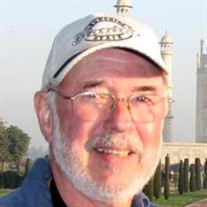 Charles Reynolds Martin, 83, died October 27, 2021, in hospice at Sumter Senior Living, The Villages, FL. He was the son of Willard Edgar Jr. and Anne Martin (nee Roscoe). He was a 1955 graduate of Oneonta High School, Oneonta, NY, and went on to earn degrees in Electrical Engineering and Liberal Arts from Union College, Schenectady, NY, in 1960. He was hired right out of college by IBM, where he worked as a hardware engineer, designing some of the first tubeless (transistorized) computers. He was married to Ruth Ann Martin (nee Bullis) from 1959 to 1982; then Karen Martin (formerly Nevil and Packenen, nee Resnick) from 1984 until her death in 2017. Mr. Martin was a fire policeman with Woodstock (NY) Volunteer Fire Company #4 in the mid-1970s to early '80s, and a longtime member of Trailsweepers Ski Club from the early 1980s. He retired from IBM in 1993. He enjoyed, in no particular order, skiing, making lists, lobster, golf, square dancing, real British marmalade, bird-watching, hiking, world travel, crossword puzzles, good wine, and good companionship. He is survived by his sister, Elizabeth Gregory and her husband Jim; his first wife, Ruth Martin; their daughter, Lee-Ann Bean and her husband, Steve; and son, Christopher Scott Charles Martin and his wife, Kim Calcagno; his stepdaughter, Stacy (nee Nevil) and her husband Kurt Vanderhorst; two grandchildren, Lindsay Lauren (nee Bean) and her husband, Matthew Kostadinov; and Evan Michael Bean and his wife Samantha (nee Johnson); and two step-granddaughters, Leah and Maya Vanderhorst. Funeral services will be held at 2:00 p.m., November 12, 2021, at Page-Theus Funeral Home, 914 West Main Street, Leesburg, FL, followed by inurnment at Hillcrest Memorial Gardens, 1901 County Road 25A, Leesburg, FL. In remembrance of Mr. Martin's life, the family asks that any charitable donations be made to The Pancreatic Cancer Action Network (pancan.org) or The Alzheimer's Association (alz.org). For anyone who is unable to attend the services at the funeral home, you may watch a live stream of the services by following the link below: http://webcast.funeralvue.com/events/viewer/63103/hash:BA73A9E6109AE228

Charles Reynolds Martin, 83, died October 27, 2021, in hospice at Sumter Senior Living, The Villages, FL. He was the son of Willard Edgar Jr. and Anne Martin (nee Roscoe). He was a 1955 graduate of Oneonta High School, Oneonta, NY, and went... View Obituary & Service Information

The family of Charles Reynolds Martin created this Life Tributes page to make it easy to share your memories.

Send flowers to the Martin family.