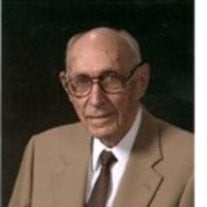 Charles Houston Hanson, 88, went to be with the Lord on February 6, 2013. He had given up his struggles and gone to a new life in a better place. Charles ‘Chuck’ Hanson was born Dec. 19, 1924 in Pasadena, CA to Clarence and Ruby (Houston) Hanson, but spent his life growing up in Rochester, NH. He was the youngest and the last of six sons and was preceded in death by his brothers; Robert, Conrad, David, George, and Rev. Richard Hanson. Chuck is survived by his loving wife Barbara of almost 21 years; her two children, and one grandchild. He is also survived by his two sister-in-laws and many nieces and nephews, all in CA. After his graduation in 1942, Chuck enlisted with the U.S. Army Air Corps Cadets program to fight for his Country in WWII. After finishing aviation training in 1943, he was a B-29 Bomber Pilot and his orders sent him to the Pacific Theater. Upon receiving his honorable discharge, and sent back stateside, Chuck took advantage of the G.I. Bill and enrolled in the University of Southern California graduating with a BA in Business Administration. His first business venture was with his siblings, calling it ‘Hanson Brothers’ which was a lathe spinning shop. Then he went on to spend many years in management of manufacturing and engineering, venturing off into the Texas oil patch. He was General Manager of FMC’s Wellhead Equip. Div. in Houston until 1986, and was President of Cooper Industries Flow Control Div. in Houston, which required travels to many countries throughout the world until he retired in Dec. 1991. Chuck married Barbara on Apr. 24, 1992 and while in Houston, they formed Hanson & Associates, an Accounting and Tax Service. From there he ventured into buying HUD houses and remodeling them for resale, and finally the craft business in Texas. He loved to work in his garage shop. Finally Chuck and Barbara retired again and moved to Las Cruces, NM and built their retirement dream house. It wasn’t until they saw a video of ‘The Villages’ that they decided to pull up stakes and moved to The Villages in 2007. Chuck was a member of the Fairway Christian Church and did a lot of volunteer work for them and other churches over the years. Together he and Barbara delivered meals to the homebound for fourteen years across three different states where they lived. Chuck loved playing bridge on his computer every afternoon with his cat in his lap, or doing cross-word puzzles, watching sports on TV, reading books, and was diligent in reading his Bible. There will be a Memorial Service to celebrate his life at Fairway Christian Church on Saturday, Feb. 16, 2013 and 2:00 p.m. In lieu of flowers memorial donations may be made to the Fairway Christian Church Building Fund, 251 Avenida Los Angelos, The Villages, FL 32162. Page-Theus Funeral Home And Cremation Services www.pagetheus.com

Charles Houston Hanson, 88, went to be with the Lord on February 6, 2013. He had given up his struggles and gone to a new life in a better place. Charles ‘Chuck’ Hanson was born Dec. 19, 1924 in Pasadena, CA to Clarence and Ruby (Houston) Hanson,... View Obituary & Service Information

The family of Charles Houston Hanson created this Life Tributes page to make it easy to share your memories.

Charles Houston Hanson, 88, went to be with the Lord on February...

Send flowers to the Hanson family.