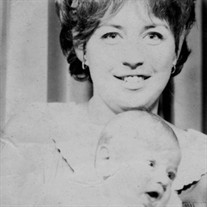 Bonnie Catherine Styles of Leesburg, Florida was declared dead on March 30, 2020 at the age of 72. She was my mother and, as with many mothers, was complicated - at times exhausting. But she was my mother and I loved her. She raised me on her own during a time when it wasn’t normal to be a single parent out of wedlock. But she did it because that’s what you do - and she devoted her life to it. There were times growing up when our relationship more often resembled friendship than mother/son. Still, I remember my childhood fondly. We were blessed to have help from her parents, Ivan and Edna Brecheisen. They gave us a roof over our heads in Waukegan, IL to call home. I was too young to understand it at the time but, as can often be the case, assistance came with strings that caused my mother stress. Ivan, a war veteran of WWII and the Korean Conflict, passed away in the late seventies following a battle with cancer. She was the apple of her father’s eye - until I was born. It was an unattainable status she fought to regain until the day she died. My mom took on many jobs to make ends meet and give me all the toys a young boy could dream of. Most were Star Wars related. My mom worked all day - and at times all night. Sometimes that meant taking me with her. It may have been work for her, but I was the proverbial kid in the candy store. The department store’s head of security took me under his wing and showed me all the secret two-way mirror spots to spy on people. Perhaps that’s where I first got the idea to become a photographer. My mom spent her life working in the military as a civilian. She eventually climbed to the rank of executive assistant to the Generals at Fort Sheridan’s US Army Recruiting Academy. I remember calling her there and people telling my mother her daughter was on the phone. Mom wanted a girl. Maybe that helped make up for it. For better or worse, my father came back into the picture. My mother married Larry Styles and took his name at the Waukegan, IL courthouse in the summer of 1991. I remember the year because I went and saw the film Terminator 2 earlier that day. Later, I joined them at their wedding reception in our backyard. My mom - on paper and perhaps in her heart - finally became “legitimate,” no longer the unwed mother. Nevertheless, we were not a family. Perhaps my mom tried to make things right and even rewrite history after all those years. But life isn’t a movie. It’s just not that simple to live happily ever after. Those were turbulent years, defined by an increasingly difficult relationship with my mom, and the stranger that was my biological father. During that time, I left for college to start my own life and Fort Sheridan closed its doors in 1992. My mother and Larry would eventually relocate to Fort Knox in Kentucky. There, she ended her career as a civilian in the military and retired. Like many retirees, mom and Larry moved to Florida. They moved into Mid Florida Lakes, the same retirement community of her ailing mother Edna. They took care of her until her passing in May 2000 with Larry following in 2010. Looking back now, I know that, like anyone else, all my mother wanted was a “normal” life. But there were always obstacles. Mom, I don’t know what I believe happens when we die - but I hope you know I love you. I know you struggled with finding happiness in the day to day and within yourself, but you established the foundation of who I am today. I hope you’ve found the sense of peace that I wanted for you (and knew you could have). In the end, I think we knocked down many of the walls we built between one another. I was hoping in the coming years that we would continue to grow that relationship - but time wasn’t on our side. Bonnie Styles is survived by her son Barry Brecheisen and his family, her brother Bruce Brecheisen, her niece Niky Brecheisen Mazur and nephew Brandon Brecheisen. Arrangements are entrusted to Page-Theus Funeral Home and Cremation Services, Leesburg.

Bonnie Catherine Styles of Leesburg, Florida was declared dead on March 30, 2020 at the age of 72. She was my mother and, as with many mothers, was complicated - at times exhausting. But she was my mother and I loved her. She raised me on her... View Obituary & Service Information

The family of Bonnie Catherine Styles created this Life Tributes page to make it easy to share your memories.