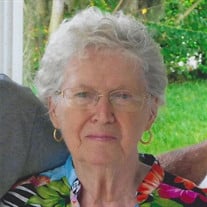 Bonnie Jean Keesling, 92, Leesburg, Florida went to be with the Lord on December 12, 2018 at The Cove in Tavares, Florida under the loving care of her Daughter. Born on November 21, 1926 in Knox City, Missouri to her parents, Rev. Charles F. and Mabel E. Heaton. In her early years, Mrs. Keesling worked as a dance instructor for Arthur Murray Dance Studios where she told how she gave the legendary Gene Autry dance lessons. She met the love of her life, Charles, a Korean War Army Veteran while working at Shell Oil Company in Tampa. She went on to join the management staff at the Tampa International Airport prior to its opening in 1971. She had a long career as an Office Manager / Supervisor in several firms in Atlanta. Upon retiring, she and Charles moved to Leesburg where they became active in the First Baptist Church of Leesburg. There, they led the Nursing Home Ministry and music program for 11 years. She had a passion for travel, playing piano, adventure, and Jesus. She is survived by her loving daughters: Janet Lewis and her husband Doug of Tampa, FL and Christy Friters and her husband Patrick of Leesburg, FL; two grandchildren: Dr. Michael Friters and his wife Gwynne of Boynton Beach, FL and Maj. Matthew Friters of Bel Air, MD; four great-grandchildren: Tyler, Alexandra, Audrey and Ryan; She was preceded in death by her parents, her two infant sons who died at birth, two sisters, Ila and Eunice, both of Missouri and her beloved husband Charles Keesling. She was a beloved mother, grandmother, great-grandmother and servant of Christ. Her sense of humor and her unwavering love for God, country, and family will be sorely missed. Funeral Services will be held on Monday, December 17, 2018 at 10:00AM at First Baptist Church of Leesburg in the chapel. Visitation will be held on Sunday, December 16, 2018 from 2:00PM till 4:00PM at Page-Theus Funeral Home, Leesburg, Florida. Following the funeral service a burial will follow at Florida National Cemetery, Bushnell, Florida. Online condolences may be shared by visiting www.pagetheus.com.  Arrangements are entrusted to Page-Theus Funeral Home and Cremation Services, Leesburg.

Bonnie Jean Keesling, 92, Leesburg, Florida went to be with the Lord on December 12, 2018 at The Cove in Tavares, Florida under the loving care of her Daughter. Born on November 21, 1926 in Knox City, Missouri to her parents, Rev. Charles F.... View Obituary & Service Information

The family of Bonnie Jean Keesling created this Life Tributes page to make it easy to share your memories.

Bonnie Jean Keesling, 92, Leesburg, Florida went to be with the...

Send flowers to the Keesling family.