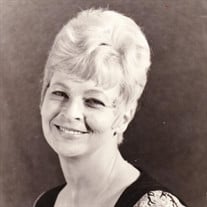 Mrs. Beverly Ann Welch Loeschke, daughter of the late Charles Welch and Irene (Beedle) Welch, and beloved wife of Thomas Henry Loeschke, was born on November 19th, 1931, in Baltimore, Maryland, and passed away on December 5th, 2020, in Leesburg, Florida. Beverly was quite an accomplished musician and a child prodigy, who began playing drums at age 2. At age 4, she was cast in the movie “Merry Go Round of 1938” playing drums. She went on to master the marimba, and by age 14, was astonishing all who witnessed her talent. Beverly was a born performer. A natural. She married the love of her life, Thomas Loeschke, in 1953, and continued to play, perform, and teach music, and raise a family. She was proceeded in death by her parents, Charles and Irene, her brother, Charles (Bud) Welch, and her sister Mary (Rita) Welch Loeschke. Yes, Beverly and her sister married Loeschke cousins, Thomas and Frank. Beverly and Rita also had babies, Terri (to Bev) and Patti (to Rita) on the same day. She is survived by her husband, Thomas, and her three children, Terri (Rob) Dove, Rowland (Cathy) Loeschke, and Annie (Frank) Craig; her grandchildren, Shawn (Jessica) Liebegott, Brittany Liebegott, Michael Loeschke, Ashley (Dakota) Martinez, Molly Craig, Teagan Craig, and Maggie Craig; and great grandchildren, Curtis Liebegott, Natalie Liebegott, Allison Martinez, Skylar Martinez, and Peyton Martinez. Arrangements are entrusted to Page-Theus Funeral Home and Cremation Services, Leesburg, FL

The family of Beverly Anne Loeschke created this Life Tributes page to make it easy to share your memories.

Send flowers to the Loeschke family.