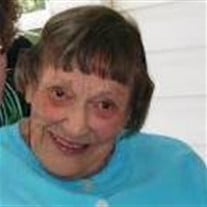 Betty-Marie Evelyn Ruggles of Leesburg, Florida, died at Leesburg Regional Medical Center Wednesday, June 18, 2014. She was born in Moline, Illinois, in 1920 and moved with her family to Michigan at the age of three. After graduation from Mercy College of Nursing in Detroit she worked as a nurse in Pontiac. She married Anthony Gerzanics in 1941, continued in nursing while her husband served overseas in the US Army. Her daughter, Sue, was born in 1946; son Charles was born in 1947. Moving to Florida with her family, in 1959, she worked as a surgical nurse at St. Mary’s Hospital in West Palm Beach, retiring in 1985 as Manager of Surgery. Following the move to Florida Mrs. Ruggles broadened her lifelong interest in water activities into scuba diving, becoming an accredited instructor for the National Association of Underwater Instructors. In 1966 she teamed with another woman to win the Woman’s National Underwater Spearfishing Championship in Miami. She was very familiar with the waters of South Florida and, with other woman divers, traveled to the Bahamas and other Caribbean dive locations. In 1971 she incurred an injury, believed to be an air embolism, while diving off Palm Beach. Following emergency treatment in a decompression chamber, and extensive therapy she progressed from wheelchair to crutches, to a cane, and eventually returned to work but no longer as a surgical nurse—a profession she had come to love. She gradually resumed scuba and traveled even more extensively to dive in the western Pacific accompanied by her second husband. After her retirement she continued to travel with several trips to Europe and South America. She also served as a uniformed volunteer with the Palm Beach County Sheriff Department enforcing Handicap Parking statutes. When diving became more difficult she and her husband took up RV travel and continued until 2005 visiting friends and relatives and attending Elderhostel’s from Maine to the Pacific Coast. They moved to Cedar Key, FL, in 1993 following a year “on the road” highlighted by a three-month tour of western Canada and Alaska. While living in Cedar Key she was active in the Women’s Club and Garden Club and volunteered as docent in both the Cedar Key State Museum and the Historical Society Museum. She has been a resident of Leesburg since 2003. Mrs. Ruggles was predeceased by her son Charles and her sister Yvonne Wood. She is survived by her husband Gilbert, two brothers, Dale Fishwild of Boise, Idaho, and Graham Fishwild of Waterford, Michigan; her daughter, Sue Dobson, and grandson, Eric Dobson, both, of Yuma, Arizona. The family suggests that memorial contributions be made in Betty's Name to: The Nature Conservancy - 4245 North Fairfax Drive, Suite 100, Arlington, VA 22203-1606 The Family will receive friends at the Page-Theus Funeral Home – 914 West Main Street, (downtown) Leesburg on Tuesday from 6:00 - 8:00 P. M. – A memorial Service is planned for 1:00 P. M. – Wednesday at the Community Club House in Hawthorne of Leesburg. All Arrangements are under the Careful Direction of Page-Theus Funeral Home and Cremation Services, Leesburg, Florida.

Betty-Marie Evelyn Ruggles of Leesburg, Florida, died at Leesburg Regional Medical Center Wednesday, June 18, 2014. She was born in Moline, Illinois, in 1920 and moved with her family to Michigan at the age of three. After graduation from Mercy... View Obituary & Service Information

The family of Betty Marie Ruggles created this Life Tributes page to make it easy to share your memories.

Send flowers to the Ruggles family.