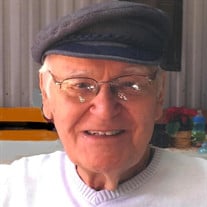 Bernard John Bell, 89, Leesburg, Florida passed away on May 23, 2016 at Florida Hospital Waterman, Tavares, Florida surrounded by his loving family. Mr. Bell was born on December 4, 1926 in Gary, Indiana to his parents John R. and Mary Bell. Mr. Bell retired from the Orange County School System having served as the Assistant Principal of Winter Park High School, West Orange High School and Conway Junior High School. He was an Adjunct Professor at Valencia Junior College and a Professor / Supervisor of Interns for the College of Education at the University of Central Florida. He had also served as a School Administrator in Indiana prior to moving to Florida. He moved to Winter Park in 1969 from Miller, Indiana and from Winter Park to Maitland and in 1985 from Maitland to Leesburg. He was a member of St. Paul Catholic Church in Leesburg, Florida and was also a member of The Knights of Columbus of Leesburg. He was a proud graduate of Northwestern University where he had received his Master’s degree in Education. He loved sailing and was a proud member of the U.S. Coast Guard Auxiliary where he served at the rank of Commander. He was also an accomplished accordion player who at one time had been offered to play with The Lawrence Welk Show. He is survived by his loving daughters: Cheryl (David) Knowles of Leesburg, FL. and Bonnie (Brian) LeFoley of Apopka, FL; a brother-in-law: Frank Krause; four grandchildren: Jennifer Lynn Schmidt, Robert Norman Schmidt, III (Kate), John Charles Knowles (Ashley Braden Knowles) and Timothy William Knowles; a great-grandson: Luke Schmidt; two nephews: David Krause and Sean Krause; a niece: Nancy Krause. A Visitation is scheduled for Sunday, May 29, 2016 from 2:00PM to 4:00PM at Page-Theus Funeral Home, Leesburg, Florida. A Mass of Resurrection will be held on Monday, May 30, 2016 at 8:30AM at St. Paul Catholic Church, Leesburg, Florida with a burial to take place on Monday, May 30, 2016 at 2:30PM at Glen Haven Memorial Park in Winter Park, Florida. On-line condolences may be shared by visiting www.pagetheus.com. Arrangements are entrusted to Page-Theus Funeral Home and Cremation Services, Leesburg.

The family of Bernard John Bell created this Life Tributes page to make it easy to share your memories.

Send flowers to the Bell family.