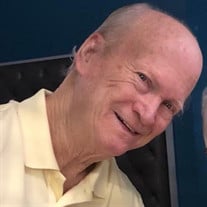 Benny Merle Mauldin, 77, The Villages, Florida, Loving husband and father of six passed away on Saturday, December 26, 2020 in Leesburg, Florida. Benny was born on March 1st, 1943 in Bexar, Alabama to Tulon Ray Mauldin and Sarah Vivian Underwood. He was the oldest of their three children. He is survived by his loving wife Margie Sue Ashley, whom he married August 11, 1989. Both worked and retired from Union Pacific Railroad, which he served proudly for 33 years. His career spanned Cotton Belt RR, Southern Pacific RR, Denver & Rio Grand Western RR and the Union Pacific RR. Benny had many 40+ year friendships and co-workers. He served as chairman for the railroad retirement reunions. He was a fierce friend to many and would do anything for them. He had a love for music with a vast collection of songs but was even more fond of live performances. He had a deep admiration for musical talents. Benny was preceded in death by his parents and also his daughter Rusty Lynn Gibson. He is survived by his sister Marilyn Robinson and her husband Joe of Winthrop Harbor, Illinois, brother Larry Mauldin and his wife Sheryl of Pensacola, Florida, Five Children: Nicole Michelle Pepper and husband Mark, Sean Christopher Mauldin and wife Tonya, Bryan Eric Mauldin and wife Michelle, Sonja Lynn Pinson and husband Billy and Chad Dewayne Brown and wife Rena. Eleven Grandchildren: Justin Gibson and wife Yuki, Heather and husband Jesse Wheeler, Daniel Kinsel, Lindsey and husband Austin Bell, Lacey Mauldin, Bryan Mauldin, Jr., Karisa Mauldin, Cody Mauldin, Emily Pinson, Austin Pinson and Cynthia Haldren and husband Tyler. Benny also has nine great-grandchildren. A memorial service will be scheduled and held in Tyler, Texas (the place Benny considered “home”) at a future date to be determined. In lieu of flowers, you may make a donation in Benny’s name to Henry Marsh Bell Masonic Lodge#1371 @P.O. Box 846 Whitehouse, Texas 75791.

The family of Benny Merle Mauldin created this Life Tributes page to make it easy to share your memories.

Send flowers to the Mauldin family.