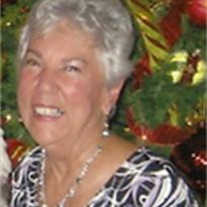 Barbara W. Wunsch age 73, passed away Saturday, December 29. 2012 at the Lane Purcell Hospice House in Sumterville, Florida. She was born in Northampton, Massachusetts and moved to the Leesburg area when she retired in 1995 from Greenville, Rhode Island.  Barbara spent her 35 year career as a Registered Nurse working at Mt. Sinai Hospital in Hartford, Connecticut and St. Joseph’s Hospital in Providence, Rhode Island. She was a very active person participating as a Brownie leader when her daughters were younger and as past President of the Wethersfield/Rocky Hill Graduate Nurse’s Association in Connecticut from 1973-75. She had a love for gardening and was a member of the Apple Blossom Garden Club in Greenville, Rhode Island where she also served a term as president. Barbara was an avid quilter and a member of the Smithfield Quilters in Greenville, RI, the Narragansett Bay Quilting Association, Narragansett, RI, and the Quilting Sisters Guild, Mt. Dora, FL, and the Plantation Quilters for many years. She received many awards and held various office positions throughout her quilting career which spanned over 35 years. She also enjoyed teaching others to quilt and performing charitable work with her many quilting friends.She was pre-deceased by her parents Samuel W. and Cecilia Lemire Wood. Barbara was a devoted wife and a loving mother to her husband of 52 years Robert; 2 Daughters – Cheryl Lynn (Paul) Felber of Smithfield, RI; and Karen Marie (Frank) Kulik of Greenville, SC; she is also survived by her brother- James A. (Carol Gilmore) Wood of Northfield, MA; grandchildren – Rebecca Lynn and Nicole Renee Couture of Smithfield, RI; Kevin Charles, Alyssa Mae, and Renee Elizabeth Kulik all of Greenville, South Carolina.A Memorial Mass is planned 8:30 a.m. - Thursday – January 10, 2013 at St. Paul’s Catholic Church in Leesburg, Florida and Inurnment is planned the same day at 11:30 A. M. at Florida National Cemetery, Bushnell, Florida. The family suggests that in lieu of flowers that memorial contributions be made to Cornerstone HospiceFoundation 2445 Lane Park Road, Tavares, FL 32778All arrangements are under the careful direction of Page-Theus Funeral Home and Cremation Services, Leesburg, Florida.

Barbara W. Wunsch age 73, passed away Saturday, December 29. 2012 at the Lane Purcell Hospice House in Sumterville, Florida. She was born in Northampton, Massachusetts and moved to the Leesburg area when she retired in 1995 from Greenville,... View Obituary & Service Information

The family of Barbara Wood Wunsch created this Life Tributes page to make it easy to share your memories.

Send flowers to the Wunsch family.