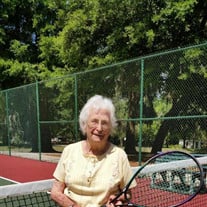 Arleeda Hickey (4/6/1925 – 1/9/2018) Arleeda Hickey was born April 6, 1925 to Lester Bombard and Margarite Jarvis Bombard in Plattsburgh, New York. Arleeda was a wife, mother, teacher, and caregiver. She earned both a Bachelor of Science and Master of Science degrees from Ithaca College. She taught physical education and coached the cheerleaders in several New York high schools. Arleeda retired from AuSable Valley High School. Even at the age of 92 (a few months shy of 93) Arleeda was able to live a full, productive, well-traveled and independent life. In 1946, Arleeda married Maurice Herman Hickey, her husband of over 50 years. Together they raised four children. She was a behind the scenes supporter for the successful coaching career of her husband, Maurice. She coached cheerleaders, drove teams and in the early days even washed uniforms. She was an avid sports fan who faithfully followed the Boston Red Sox and New England Patriots. She loved tennis and attained her goal of being on the court at 90. In 1971, she moved to Keeseville, New York to care for her father after the death of her mother. Upon her father’s death, Arleeda cared for her sister, Theresa Bombard, until her death. She was predeceased by her daughter, Linda Fish in 1992, her sister Theresa Bombard in 2002 and husband Maurice in 2003. Although she was born in Plattsburgh, NY and her teaching career was in New York, she began making Florida her home in 1976. She loved living in Hawthorne at Leesburg and socializing with her many friends. Arleeda was loved and will be dearly missed by her son, Maurice Bombard Hickey (Jane), daughters Kathleen Hickey Shea (Francis) and Tammy Hickey Higgins (John), nine grandchildren; Erika Gay (Mike), Karena Forte, Jackie Wilhelm (Mark), Bevin Saul (John), Maurice Hickey, Michael Hickey, Erin Higgins, Jaylah Higgins, and Jaycie Higgins and eight great grandchildren; Cora Gay, Sylvia Gay, Demetria Fish, Leandra Forte, Nicolette Forte, Andrew Wilhelm, Alexandria Wilhelm, and Jordan Saul. She will be missed by extended family members and special friends who treated her like family. A wake will be held from 2:00 to 4:00pm Sunday, 1/14, at Page-Theus Funeral Home. A funeral mass will be held on Monday, 1/15, at 8:30AM at St. Paul’s Catholic Church in Leesburg where Arleeda was a long-time communicant. She will be laid to rest with her husband at Florida National Cemetery in Bushnell. In lieu of flowers donations may be made to St. Jude Children’s Hospital or a charity of your choice.

The family of Arleeda B. Hickey created this Life Tributes page to make it easy to share your memories.

Send flowers to the Hickey family.