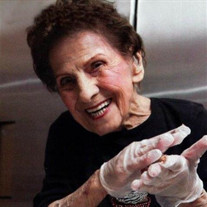 Antonette Marsella April 7, 1915 – March 10, 2016 On April 7, 1915 Antonette was born to the family of Carnio and Christina Ribicandida. The second born and the only surviving girl to a family of 5 boys and 1 girl. At a very young age Antonette was required to rise each morning at about 5:00 AM to make homemade pasta for her father for his breakfast. He was a stone mason and a stern hard working man who ran a tight ship, which was very typical of working class men during that era. It was also mandated at that time that the children, especially the elder ones to assist with the income needs of the family. Thusly Antonette cut her public school years short and worked at the shoe shops in Lynn, Massachusetts. She was very fast at the job and earned an above average income, all of which she gave to the family household. In October 1935 a tall dark Italian met this incredible good looking 20 year old Antonette and they married. They settled in a very small home in need of many repairs. Emilio and Antonette knew this would be a challenge, but both wanted a family, a fine home, a good life and both knew how to work together for a common goal, and they both loved each other so much that the task was worthwhile. With the Great Depression in effect, jobs as well as money were in short supply. Emilio went to work and Antonette became a full time Mom, with her daily duties still involving rising early getting her husband off to work, her children up, cleaned, dressed and fed. Then the chickens and ducks were to be fed, and the hog had to be slopped, and if chicken was on the menu that evening the chicken’s demise and cleaning fell on her as well. There was also always a garden to tend to and harvest which would lead to the canning process, in which she would put up hundreds of mason jars of preserves for the family to live on during the winter. (She would preserve: Plum Tomatoes cooked with basil for pasta sauces, Zucchini with Tomatoes, Green Beans, Beets, Pickled Peppers, and Carrots to name a few.) At least once a week she would bake all of the family bread as well as pizza, pies and such. There was nothing like the warm bread with a generous slab of butter and a glass of cold milk with the butterfat visible in the top of the glass bottles. She would always make and mend her family’s clothes during those early years, and because money was still very limited and at that time some of the clothing was made from grain sacks, others were altered to fit from hand me downs, and were always mended. Antonette also served as Barber and because of the dull hand shears it was something the family dreaded as each took their turn in the chair. There was no long hair in the Marsella family. She also served as the family’s Doctor making sure everyone lined up and received their spoon of Cod Liver Oil before school. She never forgot and there was no reprieve. When a room needed to be added, or a brick needed to be carried, or rooms needed to be painted, it was always done with Antonette by her Emilio’s side… they were a dynamic duo. She was always there with a hug when we needed it and she was still able to discipline in a manner that we understood. She could mediate the tiffs and spats that can occur amongst siblings, and she would always have ready a cold drink or snack for her Emilio when he came home from his first job preparing for his second job. Her children are grown now and because of Antonette they are happy with their families because she and Emilio taught them they could be a Doctor, Caterer, Tailor, Baker, Barber, or Gardener, and her teachings allowed her children to learn the goodness of life a goodness obtained through the raising of your family. In her lifetime she nurtured her children to become adults and taught them and her grandchildren and great-grandchildren to know how to love. She completed all phases of motherhood. Her family sorrows for losing her, but are also joyous she was able to complete her journey to Heaven to be with her loving Emilio who has been waiting for her to join him forever.

The family of Antonette Marsella created this Life Tributes page to make it easy to share your memories.

Send flowers to the Marsella family.