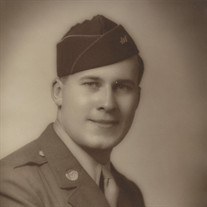 Anthony Frank Chaikowski (Chick/Tony) 100, long-time resident of Fairfax, VA and Leesburg, FL passed away Jan. 11 2022 after a short illness with his daughters by his side. Born in Brooklyn, NY, on Oct. 30, 1921, he was a first generation Lithuanian-American; the son of Anthony Thomas Chaikowsky and Anna Olga (Zalatorius) Chaikowsky. He served in the Army during WWII from 1943 to 1946 in Europe with the 290th Combat Engineers. Their first engagement in January 1945 was in the Battle of the Bulge (Colmar Pocket). In June 1945 the 290th was designated Army of Occupation. He enjoyed attending his Battalion Reunions for over 50 years and served as one of the reunion commanders. He graduated from New York University in 1947 with a degree in mechanical engineering and worked for a short period for the U.S. Naval Gun Factory in Washington DC. He was assigned to a group developing fire-control computers for aircraft cannon. When the project completed he transferred to the Brooklyn Navy Yard Design Division. He became the head of Auxiliary Machinery Branch responsible for procurement and design of deck machinery such as anchor windlasses, steering gear, cranes, davits, and catapult steam and hydraulic systems. The shipyard was engaged in modernization of older aircraft carriers such as the ORISKANY and in new construction aircraft carriers such as the SARATOGA, INDEPENDENCE and the CONSTELLATION. He designed and built the Amphibious Transport Dock Ships RALEIGH, VANCOUVER, and LA SALLE. He was instrumental in the design and construction of the cranes used to retrieve the first spacecraft. He worked in the Brooklyn Naval Shipyard for 17 years until the shipyard was closed in 1965 as a result of base closing. He transferred to BUSHIPS in Washington, DC to the Weapons and Deck Machinery Branch of the Hull Division. The branch was responsible for deck machinery and weapons handling equipment on ALL Navy ships. For a short time he was attached to a group evaluating competing designs for the Fast Deployment Logistics Ship which was abruptly cancelled before award. He returned to BUSHIPS and accepted the position as the head of the Weapons and Deck Machinery Branch, Hull Division, Naval Ship Engineering Center, from which he retired in May 1977. After his retirement he worked as a Senior Engineer with M. Rosenblatt & Sons, Inc., Naval Architects and Marine Engineers until 2001. One of his many projects included the design specifications for the Centralized Seawater Cooling System for the Arleigh Burke Class Guided Missile Destroyers. He was a member of the American Legion and the VFW. He enjoyed traveling with his family in a travel trailer (UST FANNY C) and later with his wife in their motor home touring the United States, Mexico, and Canada as well as various trips to Europe and South America. His wife of 45 years, Anna Chebanoff predeceased him in 1997. Survivors include two daughters, Christine of Leesburg, FL and Vicki Swan (Charles Boyce) of Braselton, GA; four grandchildren: Catherine (Alistair), Heather, Phil (Geraldin), Mathew (Jennifer); and five great-grandchildren, Evelyn, Molly, Hansen, Ariana, and Ronin. In lieu of flowers the family requests donations be made to Tower to Tunnels Foundation or the National World War II Museum. Arrangements are entrusted to Page-Theus Funeral Home and Cremation Services, Leesburg, FL.

Anthony Frank Chaikowski (Chick/Tony) 100, long-time resident of Fairfax, VA and Leesburg, FL passed away Jan. 11 2022 after a short illness with his daughters by his side. Born in Brooklyn, NY, on Oct. 30, 1921, he was a first generation Lithuanian-American;... View Obituary & Service Information

The family of Anthony Frank Chaikowski created this Life Tributes page to make it easy to share your memories.

Send flowers to the Chaikowski family.