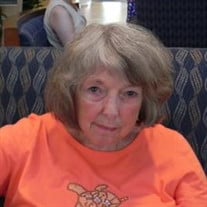 Margaret “Ann” Morris, 75, went to be with the Lord on March 22, 2015. Ann was born on October 18, 1939 in Birmingham, England to her parents Albert and Irene Robinson. Ann and her husband Christopher moved to Leesburg, FL in 2001 from Ypsilanti, MI. She was a Registered Nurse in Britain and worked for Dr. Barnardo’s Children’s Village in Barkingside England. Later Ann moved to the states and earned her Bachelor’s Degree in Nursing from Eastern Michigan University where she graduated summa cum laude in 1984. Ann then went to be a nurse at St. Joseph Mercy Hospital in Ann Arbor, MI and later was a home care hospice nurse. Ann was known as “St. Ann” by her hospice patients. She later decided to retire in 1996. Ann was very talented and had many hobbies. She was an amazing artist and enjoyed crafts, knitting, writing, the ocean, chocolate, her three cats and of course a good cup of English tea. Ann had a passion for cats, nature and flowers and was known by many for her beautiful garden. Ann and her husband Christopher enjoyed traveling to the Western National Parks together. She enjoyed Mozart and had been actively playing the piano and dulcimer since she was a kid. Ann also sang in the choirs at Royal Highlands where she and her husband lived. Margaret “Ann” Morris was a caring and nurturing woman who touched many lives and always put others before herself. She was the best mom ever and a loving wife. Margaret “Ann” Morris is survived by her loving husband of 52 years: Christopher J. Morris, of Leesburg, FL; Daughter: Maria Helena Morris, of Clermont, FL: Brother: Robin Robinson; and Sisters: Ann Cannon, of Coventry, UK and Marita Hart, of Cambridge, UK. A memorial service will be held on Saturday March 28, 2015 at 1:00PM at Page-Theus Funeral Home. Flowers may be sent to Page-Theus Funeral Home located at 914 West Main St. Leesburg, FL 34748. Services have been entrusted to Page-Theus Funeral Home, Leesburg, FL. On line condolences and memories may be shared by visiting www.pagetheusfuneralhome.com.

The family of Ann Morris created this Life Tributes page to make it easy to share your memories.

Send flowers to the Morris family.