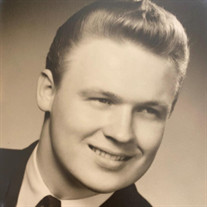 Andres Talts b. 1942-d.2020 Born in 1942 in Tallinn Estonia to Herbert and Vaike Talts, Andy was their first son and an only child until he was 21 years old (when his brother Karl was born). The pre-Karl Talts family fled Estonia in 1944. Vaike... View Obituary & Service Information

The family of Andres Talts created this Life Tributes page to make it easy to share your memories.

Send flowers to the Talts family.