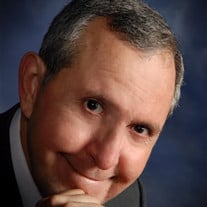 Leesburg, FL - Andres Iturbe, known to family and friends as “Andy,” age 69, passed away peacefully at home surrounded by loved ones on February 11, 2017 after a battle with pancreatic and liver cancer. Andy is survived by his loving wife of 44 years, Maria; his son Andrew Iturbe and his wife, Heather, of Woodstock, GA; his daughter Kristie (Iturbe) Berry and her husband, MAJ Harvie Berry, Jr. of Greenville, SC. He also leaves behind five beautiful granddaughters: Isabella, Annabella, and Sophia Berry; and Eleanor and Kennedy Iturbe. Andy’s parents moved from Spain to Cuba prior to his birth, and established a successful dairy business. His parents instilled the value of helping others at a young age, and were revered in the community for their philanthropy and service to others. Andy was born in Havana, Cuba and came to the United States at age 14 in 1962. He resided in Miami and Las Vegas, but Miami became his home. One of his proudest days was in 1971 when he became a U.S. Citizen. He met Maria in 1970 and they married on August 26, 1972 at St. Dominic’s in Miami, FL. He attended ROTC at the University of Miami and was commisioned in 1972 as a Second Lieutenant—fulfilling his dream of becoming a soldier. He received his Bachelors degree in History from Florida Atlantic University and obtained his Master’s degree from American Technological University in Personnel Management. Andy proudly served his country as an Infantry Officer with honor and integrity for nearly 23 years. He was a dignified Airborne Ranger, and received numerous awards such as the Legion of Merit. His duty stations included: Ft. Benning, GA; Ft. Hood, TX; Ft. Buchanan, Puerto Rico; and Kitzigen and Schweinfurt, Germany. He successfully commanded the First Cavalry Division Detachment in Ft. Hood as well as the Recruiting Command in Birmingham, AL. He served as Advisor to the Saudi Army, fought in the Gulf War and was instrumental in the development of the Bradley Fighting Vehicle. He retired as a Lieutenant Colonel in 1995. Upon retiring from the Army, he worked as the International Sales Manager for Bellwether, Inc. traveling the world and bringing home gifts for loved ones. He moved to Yalaha, FL and shortly thereafter worked for the Town of Lady Lake. He was appointed as the interim Town Manager and then became the Human Resource Manager. He eventually transitioned to the position of Human Resource Manager for the Clerk of the Court for Lake County for six years, and was an active member of The Society for Human Resource Management (SHRM). Andy was honored for his contributions by having a scholarship named after him to assist students pursuing a degree in Human Resources. He retired for the second time in 2006. He then became certified as a Florida Supreme Court mediator and served as a Guardian-ad-litem. Andy was a faithful servant to the Catholic Community of St. Paul, and was a Third Degree member of The Knights of Columbus. He was one of the founders of the Hispanic Ministry, which celebrated its 10th anniversary on May 25, 2016. He served as a Catechist for the Spanish Religious Program, was a FOCUS Coordinator, a Prison Minister at Coleman Prison, a Tutor at St. Paul’s Catholic School, and a Translator for the Church and School. Andy also served on the Parish Counsel for several years. As a result of his selfless dedication to church and others, Andy and Maria were selected as recipients of the Father Philip J. Stegeman Memorial Volunteer Award in 2012. Andy was a true Patriot, a hero. He loved wearing his black Ranger hat everywhere he went, and was truly selfless and giving in his time, love and wisdom. He allowed Christ to use him and share His love and grace to everyone—especially this past year. Every outing with Andy was an opportunity to teach others and share his story. Andy was a life-long learner and never settled for the idle life. He was always doing something! Andy was a constant light for others—always lending a hand, time and resources. He always served with love, a smile and a story, and asked for nothing in return. His absence will be greatly felt. 2 Timothy 4:6-8 For I am already being poured out like a libation, and the time of my departure is at hand. I have competed well; I have finished the race; I have kept the faith. From now on the crown of righteousness awaits me, which the Lord, the just judge, will award to me on that day, and not only to me, but to all who have longed for his appearance. Andy, Honito, Pipo, Tio, Padrino: You have crossed the finish line! You ran an amazing race! Even though you have received the prize, you remain humble! We Love You and We Will Miss You! We Find Peace and Joy in knowing we will see you again because our God is loving, merciful, and gracious! Please visit Andy's memorial website at http://www.iturbe.com/andy for additional information.

Leesburg, FL - Andres Iturbe, known to family and friends as &#8220;Andy,&#8221; age 69, passed away peacefully at home surrounded by loved ones on February 11, 2017 after a battle with pancreatic and liver cancer. Andy is survived by his loving... View Obituary & Service Information

The family of Andres " Andy " Iturbe created this Life Tributes page to make it easy to share your memories.

Leesburg, FL - Andres Iturbe, known to family and friends as...

Send flowers to the Iturbe family.