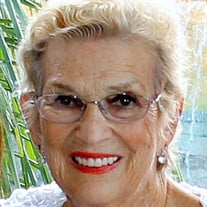 Alfreda Lucy Johnson Lindsey age 83, passed away early Friday, January 1, 2016 in Tavares, Florida. She was born in Stockbridge, Michigan February 18, 1932 to Robert and Erma (Breese) Wood, and moved to the Tavares area in 1994 from St. Cloud, Florida. Alfreda’s professional life spanned decades and she mastered many occupations. Her working life began as a Cosmetologist, and she went on to own and operate the Alexandria School of Beauty in Ann Arbor, Michigan. Her love of teaching eventually led her back to college where she earned her Bachelor’s degree and then a Master’s degree in Special Education from Eastern Michigan University in Ypsilanti, Michigan. She retired to St. Cloud, Florida in 1981 and her restlessness guided her to a new career as a Realtor, a job which she pursued with passion until moving to Tavares. She was a longtime member of the Church of Jesus Christ of Latter Day Saints Church, in Leesburg, Florida, and was known by those close to her for her vibrant personality and giving heart. She made friends easily and enjoyed painting, card making, and crochet in her spare time. Alfreda had three passions in her life… the first was Jesus Christ; the second was her family, the third was traveling which took her to all 50 states of the U. S. and to more than 38 different countries. She loved spending time with her family, grandchildren, and great-grandchildren and considered every moment with them as “precious”. She was predeceased by her Parents, her first husband Wayne Perry Johnson, her second husband Charles Richard Lindsey, and her son Wayne Perry Johnson, Jr., brothers Robert Wood (Junior), and Lawrence Wood. She leaves behind to cherish her memory 3 daughters – Karen Ann (Don) Hinsdale of Argos, Indiana; Gail Johnson (Danny) Dew of Brooklyn, Michigan; and Christine Kay (Gene) Thomas of Nampa, Idaho; an adored daughter-in-law – Beverly Johnson of Greenwood, Indiana; her sister – Lucille Grandmasion of Douglas, Georgia; a brother – Frank Brown of Georgia; 12 grandchildren and 36 great-grandchildren. The family will receive friends at the Page-Theus Funeral Home, downtown Leesburg from 3:00 – 7:00 PM, Wednesday, January 6, 2016. On Thursday, January 7, 2016 a viewing will take place at the Church of Jesus Christ of Latter Day Saints – 1875 Mount Vernon Road, Leesburg, Florida 34748 from 9:00 AM to 9:45 AM with a funeral service following at 10:00 AM in the Church Sanctuary. Interment will take place later that day at 2:30 PM at Osceola Memory Gardens, Kissimmee, Florida. All arrangements are under the careful direction of Page-Theus Funeral Home, Leesburg, Florida.

Alfreda Lucy Johnson Lindsey age 83, passed away early Friday, January 1, 2016 in Tavares, Florida. She was born in Stockbridge, Michigan February 18, 1932 to Robert and Erma (Breese) Wood, and moved to the Tavares area in 1994 from St. Cloud,... View Obituary & Service Information

The family of Alfreda Lucy Johnson Lindsey created this Life Tributes page to make it easy to share your memories.