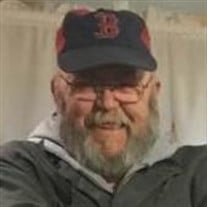 Alfred Raymond Bennett (aka “Al,” “Duke”, or as endearingly called by his Grandchildren “Grumpy”), age 66 of Tavares, Florida passed away in Leesburg, Florida on October 25, 2018 after a long battle with renal failure. In Al’s words, “It Is What It Is,” and “You Do What You Have To Do.” Al was born on August 14, 1952 in Boston, Massachusetts to Gilbert Raymond Bennett and Joan Kathleen Francis Brownell. Al is survived by his wife of 32 years Margaret Bennett , Daughters Kathleen Diorio, Deborah Krabey, Nicki Bennett, Christi McCann, and Lori Newberg, sisters, Donna Bennett, Belinda Bennett, brothers, David Bennett, John Bennett, Billy Smith, Roland Bennett, Sean Bennett, and Ryan Bennett, father in law, Robert Smith, brothers in law, Joe Smith, Jim Smith, Doug Smith, Mike Smith, Tom Smith. Al’s pride and joys were his nine grandchildren: Aliyah, Nickolas, Annabella, Aliana, Trenton, Cora, Cydney, Collin, and Anna. He was also adored by all of his nieces and nephews. Al was preceded in death by his parents, Gilbert Bennett and Joan Brownell, siblings, Paula Bennett and Eddie Smith, mother in law, Barbara Smith. He was most like a watch dog always observing and vigilant of the possible dangers to loved ones. His smiles were rare but always genuine. A private memorial will be held on Saturday, November 3, 2018 at 4:00pm. Al was a member of the Church of Jesus Christ of Latter Day Saints. He was a senior skilled water technician for Florida Water and the City of Conover, NC. Friends may leave condolences at www.pagetheusfuneralhome.com

The family of Alfred Raymond Bennett created this Life Tributes page to make it easy to share your memories.

Alfred Raymond Bennett (aka “Al,” “Duke”, or as endearingly called...

Send flowers to the Bennett family.