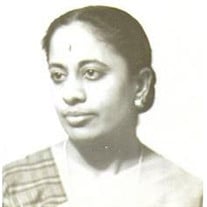 Dr. Ahalya Krishnan of Tavares, Fl previously of Youngstown, Oh, passed away on May 21, 2018 at Florida Waterman Hospital, Tavares, FL after a brief illness. She was born in Tirupur, Tamil Nadu, India, the daughter of the late, CMV Jayeendrachar and Jayalakshmi. She is survived by her husband Rama “Ram” Krishnan, her daughter Vani James (Scott), two grandsons Rajah James (Kim) and Krishna James and three great grandchildren Emma James, Neela James and Ishaan James. She is survived by three sisters, their spouses, and numerous nieces and nephews. A brother, Ragotham Achar, preceded her in death. She received her high school diploma at the age of 14; however, because of state law was unable to attend university. She completed her Visharad in Hindi in one and a half years. She became a Hindi teacher in a convent at the age of 18 and while teaching she studied privately and earned a BA in English and Economics with Madras State ranks. She also wrote “Readers in Hindi” for 6th through 11th graders. In Washington DC she worked as an Economic assistant in the Indian Embassy, where she met Ram. From 1965 to 1967 she worked as a Statistical Assistant at the World Bank. In 1969 she graduated with High Honors from the University of Wisconsin (Platville) with a Master’s Degree in Guidance Counseling. She received her PhD from Kent State University in Educational Psychology in 1975 and became a full-time professor at Youngstown State University, teaching there from 1975 to 1996. Among many other awards and accolades, she received the Distinguished Professorship Award. Ahalya, “Ahal,” Mom, Avva, Ajji, Auntie, best friend, religious scholar and adviser, and Indian chef were some of her many titles. For those who newly arrived in Youngstown, Ohio her home was a welcoming place that always reminded them of their families back in India. This has been a recurring theme no matter where Ahal and Ram have lived. She remains forever in the hearts and memories of all who have been in her presence. Her duty to her family was first and foremost and brought her the greatest joy. Her love of the Hindu culture and philosophy as well as her faith in God have been a grounding force throughout her life. She will be missed but remembered by all. Ahal and Ram enjoyed their lives together, they loved to travel, loved their grandchildren and great grandchildren and the new life they made in Florida and with the many new friends they have met. Viewing will be at 2pm with a memorial service to follow at Page-Theus Funeral Home, 914 West Main Street, Leesburg, Fl 34748. In lieu of flowers a donation can be made in her name to the SLN Temple, 6464 Sodom Hutchings Rd, Girard, OH 44420.

Dr. Ahalya Krishnan of Tavares, Fl previously of Youngstown, Oh, passed away on May 21, 2018 at Florida Waterman Hospital, Tavares, FL after a brief illness. She was born in Tirupur, Tamil Nadu, India, the daughter of the late, CMV Jayeendrachar... View Obituary & Service Information

The family of Dr. Ahalya Krishnan created this Life Tributes page to make it easy to share your memories.

Send flowers to the Krishnan family.